In the municipal area of Alcora, next to the CV-190 road, emerge the remains of a settlement located at the top of Pujolet in the Santa’s plain. It is an Imperial Roman rural settlement that, due to its large extension and the finding of grindstones and some storage pits, now covered, it probably had an important emphasis as an agrarian centre. The settlement Termes de Santa has the name of the zone where it is located. It forms a small artificial elevation in whose vicinity funerary inscriptions were found, most of them now lost. All the documented structures present formal characteristics and totally homogeneous techniques. Thanks to them it has been possible to assign it to only one cultural moment, the Roman Age.

The settlement is located in a strategic point where the Camí dels Bandejats joins. This is a historical road that goes from Southeast to Northwest crossing the eastern half of the municipal area of Alcora and by the site’s West-Southwest side. To the West it joins the Camí de Vilafamés. This crossroads is traditionally known as Creu de Santa.

Works started with sixteen archaeological surveys distributed in the zones with the presence of archaeological materials documented during the prospection tasks. These works also included some surveys associated with the outline of the historical road known as Camí dels Bandejats. Based on the positive results of four of the surveys of the archaeological digging, the area of operation was enlarged to 3230 m2 of surface dug. The small hillock on which the settlement is set was affected for decades by works of terraces for planting almonds and olive trees and recently, it was totally levelled to transform the fields. The removal of soil created the mixture of the archaeological materials, among them plenty of building materials and great quantities of dolia1. 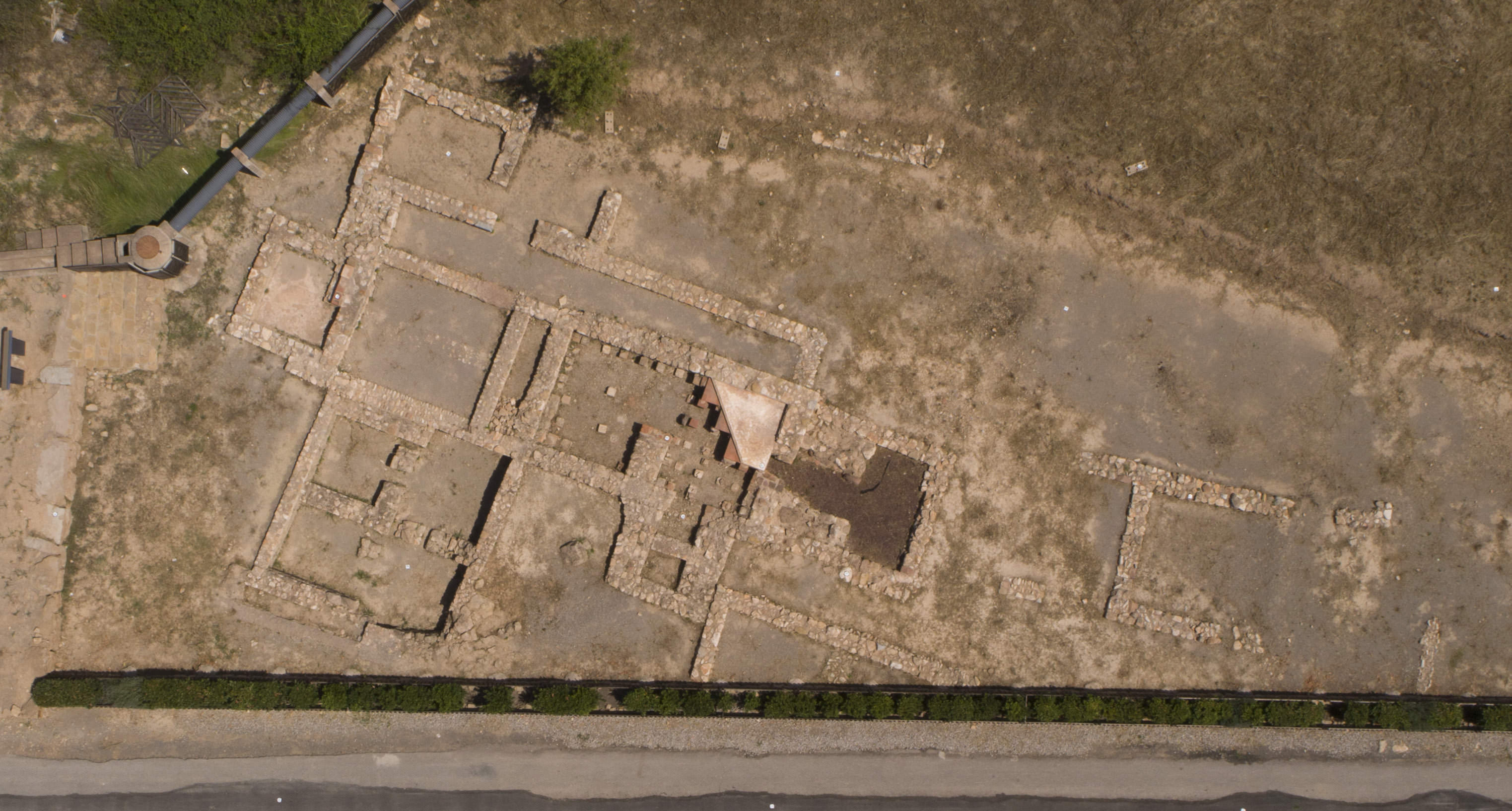 The thermal baths area, with an extension of 175m2, is limited to the East sector of the building. It was totally dug between the end of 2003 and the beginning of 2004. It is made up of six rooms with different functions, but they are all interrelated. It was built between the first and second century CE. The first room, to the North, with a surface of 18,2m2 belongs to the vestibule. It is accessible through a narrow and large corridor (13 x 1,15m). In its West flank two cold-water pools were found. They preserve the pavement and the walls coating, whereas in its North flank, two new rooms that could be part of the baths complex, were found.

The second rectangular room (12 m.2) was probably dedicated to the caldarium2 and another adjacent one to the tepidarium3 (8,2 m.2), hypothesis confirmed by the presence of part of the hypocaustum4 that was located under the pavement as a heating system. The thermal energy was created through a wood stove, praefurnium5 (12,4 m.2), located at the Eastern side of the heated rooms. From there the heat was distributed under a false floor raised by the suspensurae, or brick pillars. In Pujolet de Santa these pillars are almost 60 cm. high.
To the West of the vestibule it is the frigidarium6 and in the South area another quadrangular room of 30,7 m.2, divided in four parts belonging to the natatio7. It seems that the construction of the baths followed simple linear plans and the common model of the Roman thermal baths. In fact, the vestibule acts as an organizing axis of the thermal complex: the hot rooms were located on the Western flank whereas the cold ones (frigidarium and natation) were on the Eastern one.

Regarding the thermal baths chronology, there are two distinguished structural phases. The first one between the first and second century CE corresponding to its construction and the second related to the renovation works in the baths vestibule’s room between the second and the third century CE. They took advantage of the foundations of the rough stone wall with a powerful backfill of clay soil. On this level the opus tessellatum8 pavement was placed and the wall formwork of the vestibule and of the hypocaustum were built. Finally, the decline took place between the fourth and the fifth century CE followed by the on-going abandonment of the site. The mosaic remains found in the northern side of the changing room are vey scarce but some fragments can be observed. Thus, attached to the wall, there is a framed vegetal trimmings band with coloured tesserae of different sizes and with a drawing of a pair of sandals in the middle with a possible reference to the need of taking off your shoes before entering the baths.

The archaeological digging process in the area of the settlement affected by the works of the CV-190 detour allowed to document walls structures and a series of stratigraphic levels that gave enough data to create the correct interpretation and chronology of the remains. In the South zone, the rough stone foundations were the perimeter closing of the baths zone and a possible service area, generally with a height from 15 to 20 cm. This zone of the site has only been partly dug but there are already documented six different parts. Maybe some of the structures were dedicated to the care of the thermal baths facilities, and the attached rooms to the fuel storage. The North and East sectors and the Eastern part of the South sector of the excavation are determined by the presence of powerful levels of backfill that take advantage of the depression of the natural ground. In another cases there are used to clog large pits dug in the geological subsoil, clays and limestone, on which some of the walls are consolidated.

Pottery and glass pieces and bronze and iron nails

Most of the material found comes from discharge levels created in some cases by the amortization of the depression of the ground and to fill pits dug on the subsoil in others.
The findings of some storage pits and grindstones point to its importance as an agrarian centre from the time
Among the recovered fragments the imports of terra sigillata9 are highlighted, common pottery from African origin and dishes lid. Together with these pieces there are also some samplers of Hispanic and Italic terra sigillata, as well as a large amount of common pottery fragments from the kitchen, glass, bronze and iron nails and a lot of fauna (above all sheep and goats, horses, pigs, deer and in a small quantity dogs and a diverse microfauna). The nature of these backfills and the study of the material culture remains found inside them point to the dump land and elements from the Roman site itself. The terra sigillata gives us the dating of these discharges (the end of the fourth century and beginning of the fifth century CE). Most of the rest of the pottery material is made up of fragments of Hispanic terra sigillata and to a lesser extent, Italic, fragments of thin walls and Campanian10 pottery and the egg white.  The pottery assigned to the Late Bronze Age and to The Early Iron Age also mixed with Iberian material is more residual.


Construction to the same level

The strata of construction are not very frequent in the Termes de Santa site because almost all constructions start from the ground level. It’s only documented in the baths, the room attached to the baths’ vestibule, the hypocaustum and in the corridor to enter them where the foundations are built on an accumulation of land of clay composition and great amount of stones to equalize the ground with that of the other rooms to which it is related to. The site has generally only one living floor. However, in some spaces there are registers of two building moments: the one of the original dimensioned surveying and some constructions to enlarge the baths or to transform the distributions of the other rooms with the building of a new access from the vestibule and the amortization of the possible frigidarium. Once the settlement is abandoned, the buildings are reducing to ruins, they completely crumble and it is not dwelled again.

1Dolium: Pottery vessel from the ancient Rome, similar to a large earthern jar used for the storage and transportation of food.

2Caldarium: Hot and steamy water baths used in the complex of the Roman thermal baths.

3Tepidarium: Warm water baths, between 25 and 30 centigrade degrees, heated up by the hypocaustum.

4Hypocaustum: Greek Word meaning “heating from downwards”. It was a floor heating system, invented or perfected by the Roman engineer Cayo Sergio Orata and used in the thermal baths of the Roman Empire.

5Praefurnium: Word used in the ancient Rome to refer to the burner of an oven.

8Opus tessellatum: Technique used in the creation of Greek and Roman mosaics in which there were used tesserae bigger than 4mm.

9Terra sigilata: Latin expression meaning “soil (or pottery) sealed” making reference to a characteristic sort of Roman bright red pottery. Its chronology goes from the first century BCE to the mid of the third century approximately.

10Campanian pottery: word used to identify a pottery production group made with black varnish made Campania, Lazio, Etruria and Sicily but it is distributed in all the Western part of the Mediterranean. Its chronology is centred between the end of the third and the first century BCE. 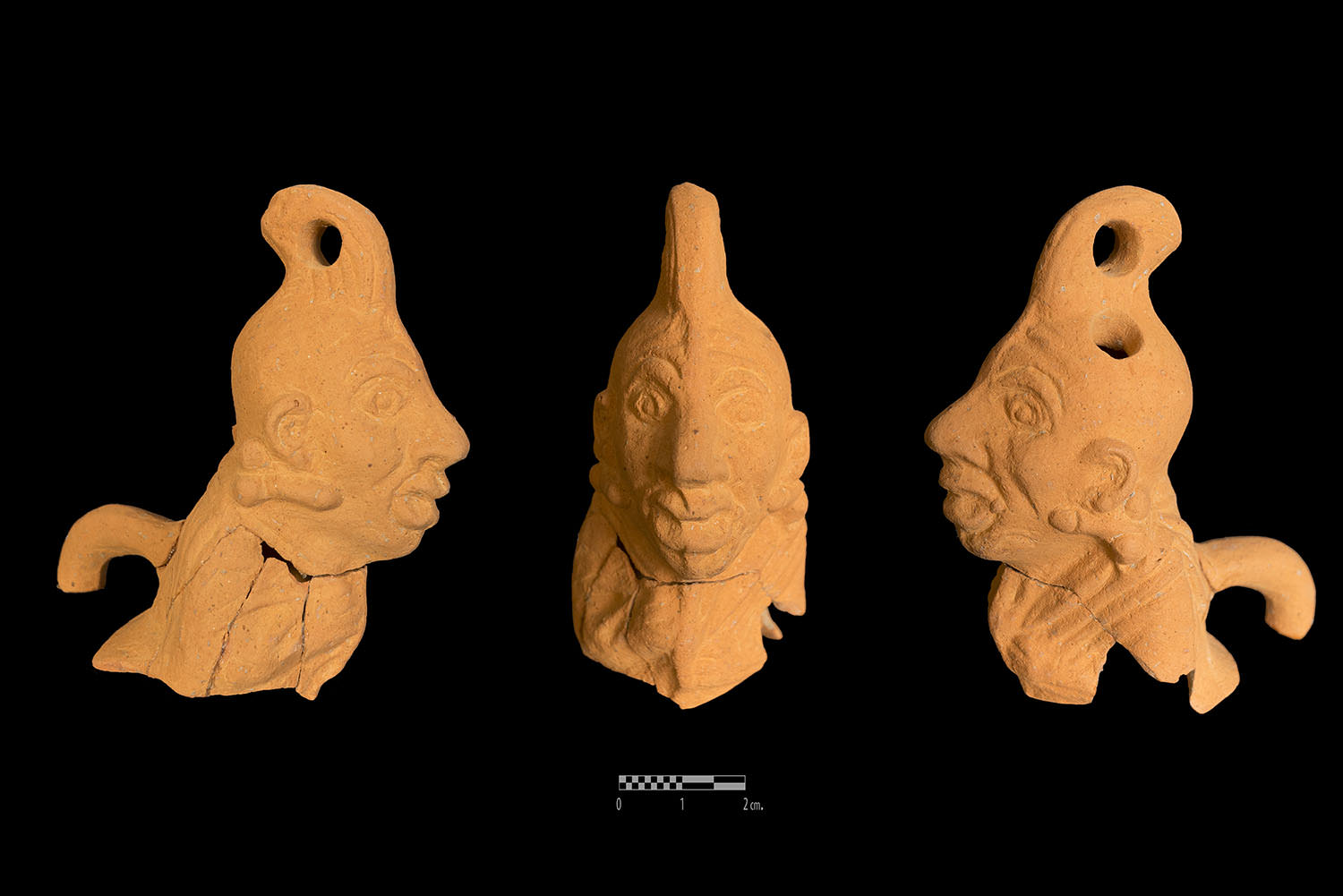 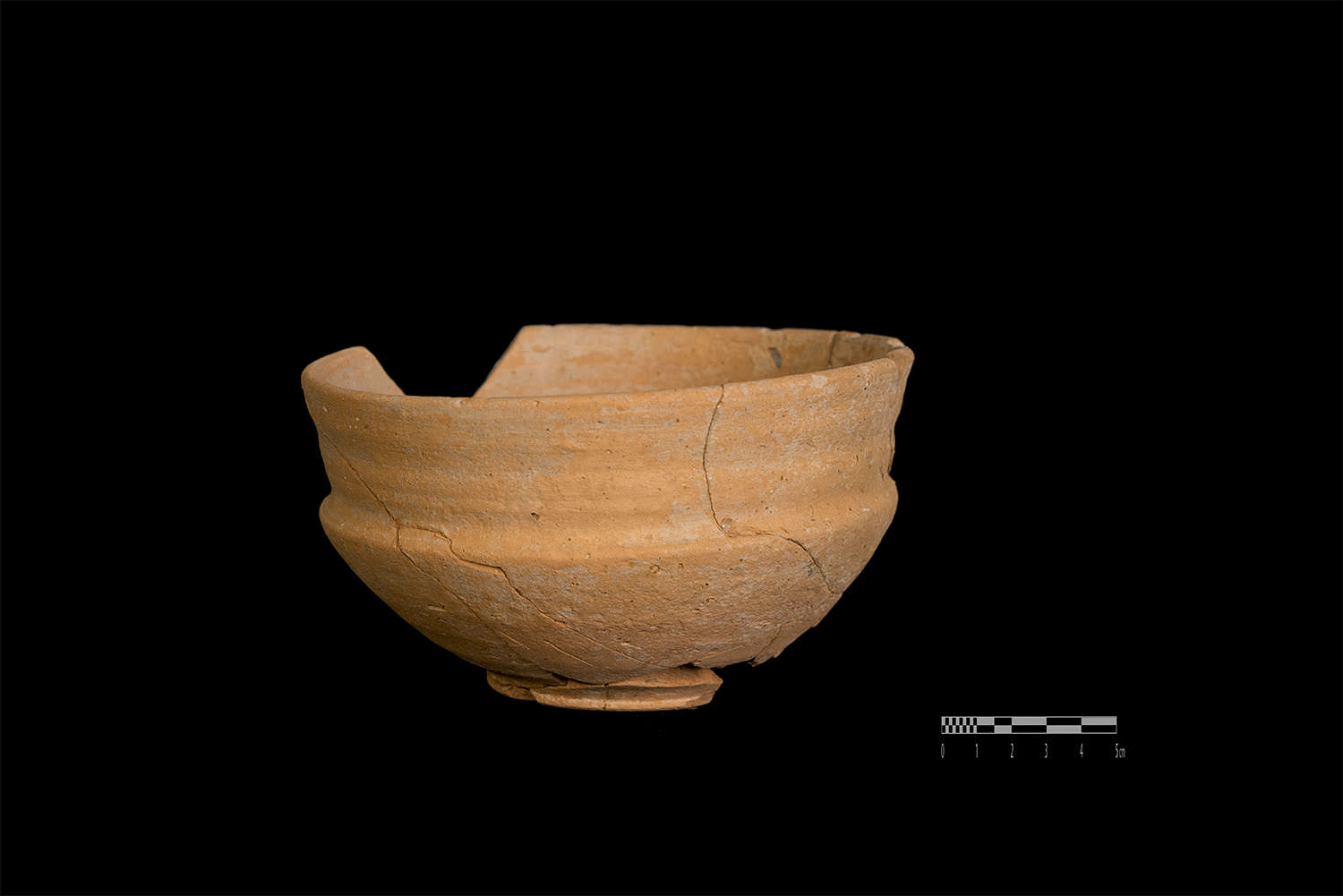 Functionality: It is a piece that belongs to the instrumentum domesticum (objects for the domestic use in human activity) with double function. One of its uses was as an object to lighten the different enclosures or areas (oil-lamp). It was also used as an object with an apotropaic effect. The two phallic amulets placed just under the ears and the rooster’s comb on the top of the head were used to banish the evil eye or invidus.

Functionality: This bowl was part of the common ware of the Roman period and it was

used as place setting at serving and eating time. It was also used as an auxiliary cookery object to prepare different food. In both cases it could contain solids as well and liquids. 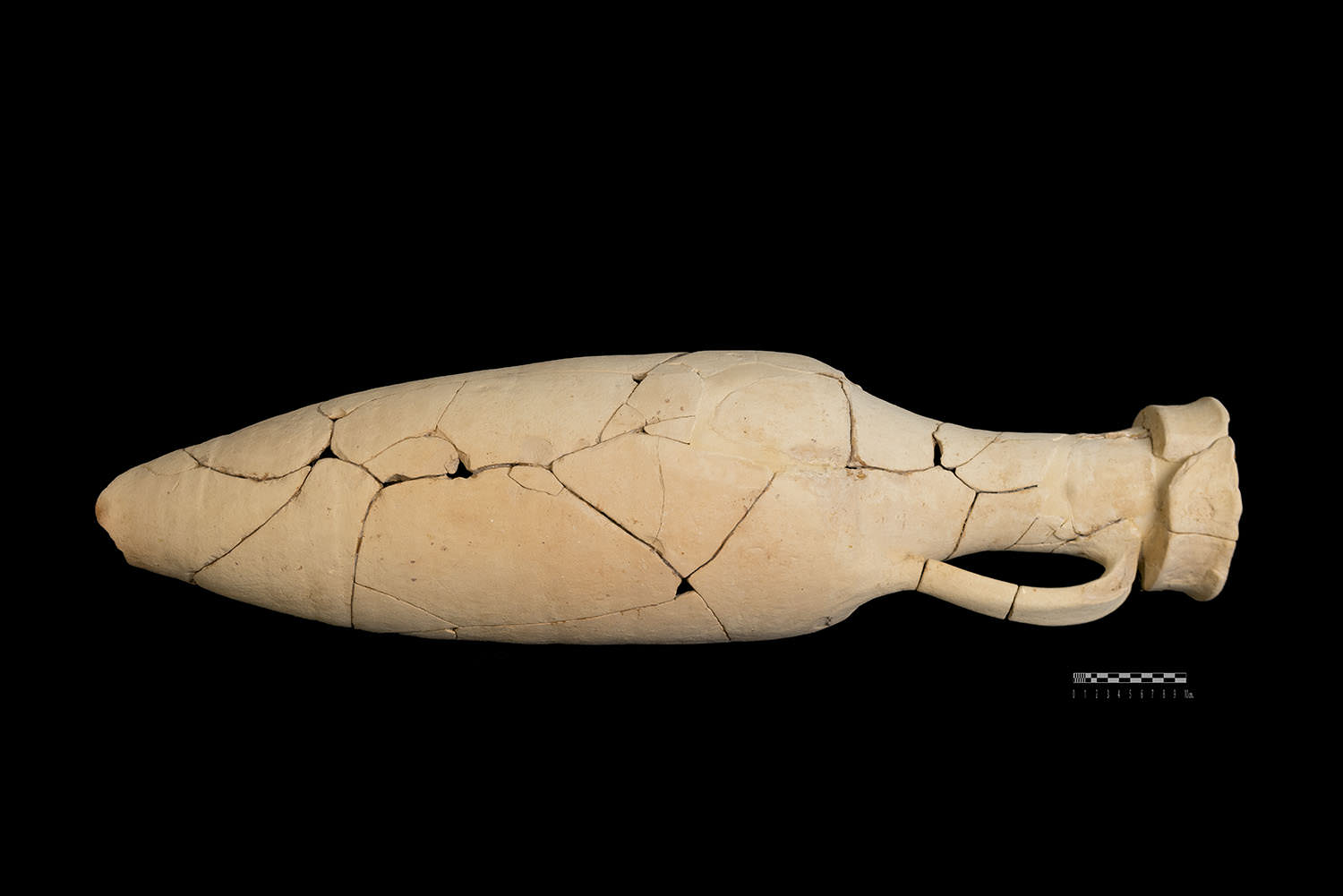 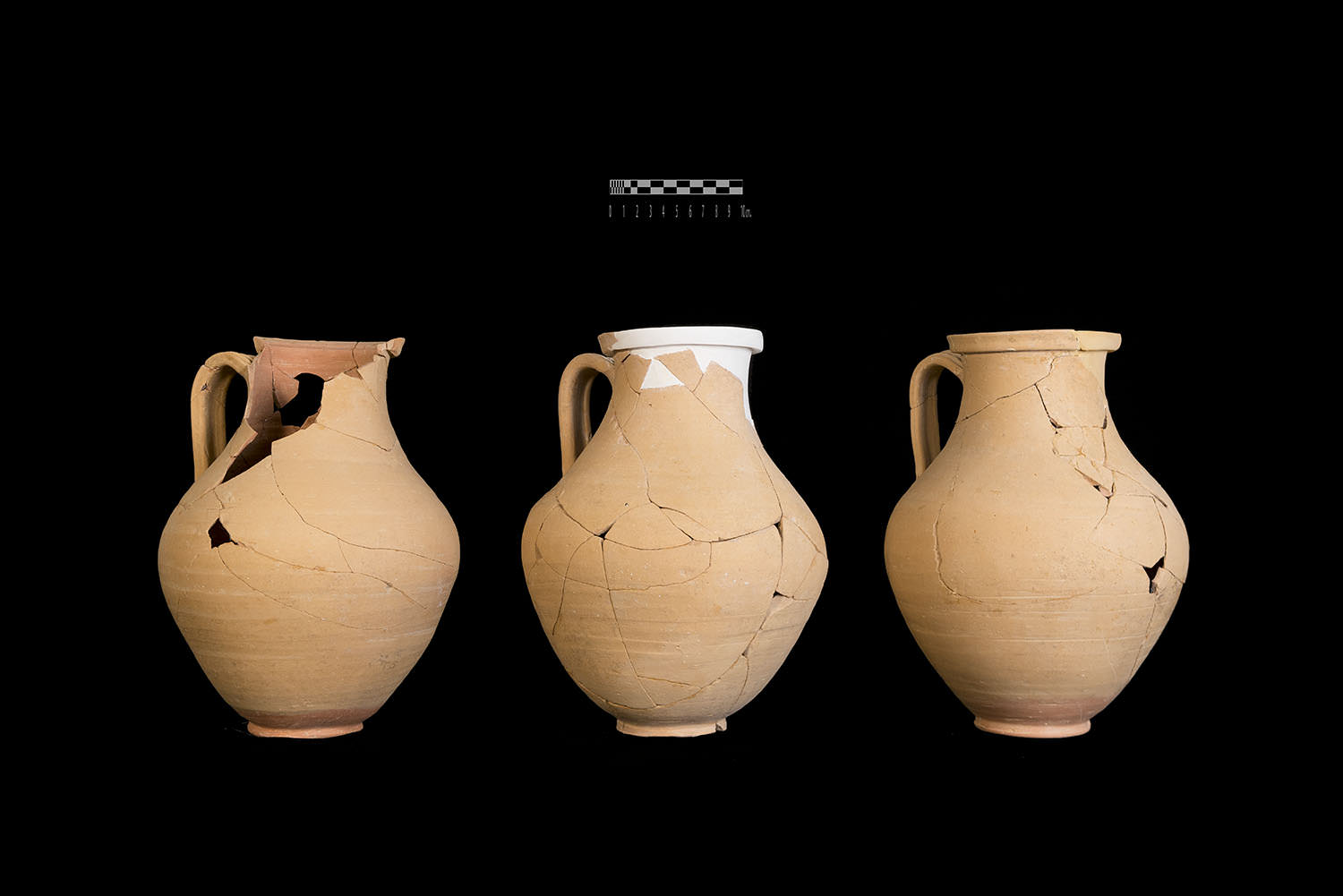 Functionality: it is a vessel used to the transport of wine and salted food. If we focused on the morphological and production characteristics of the container, we could say that these products came from the area that was known as Baetica in the Roman Imperial period.

Functionality: vessel classified in the common ware of the Roman period. It was used to store water, although it was also used for other liquids such as wine. It has been proved that it could also be used as a container for some food such as garum or fruit.

Chronology: Flavian period (69-96 CE) until the end of the second century CE. 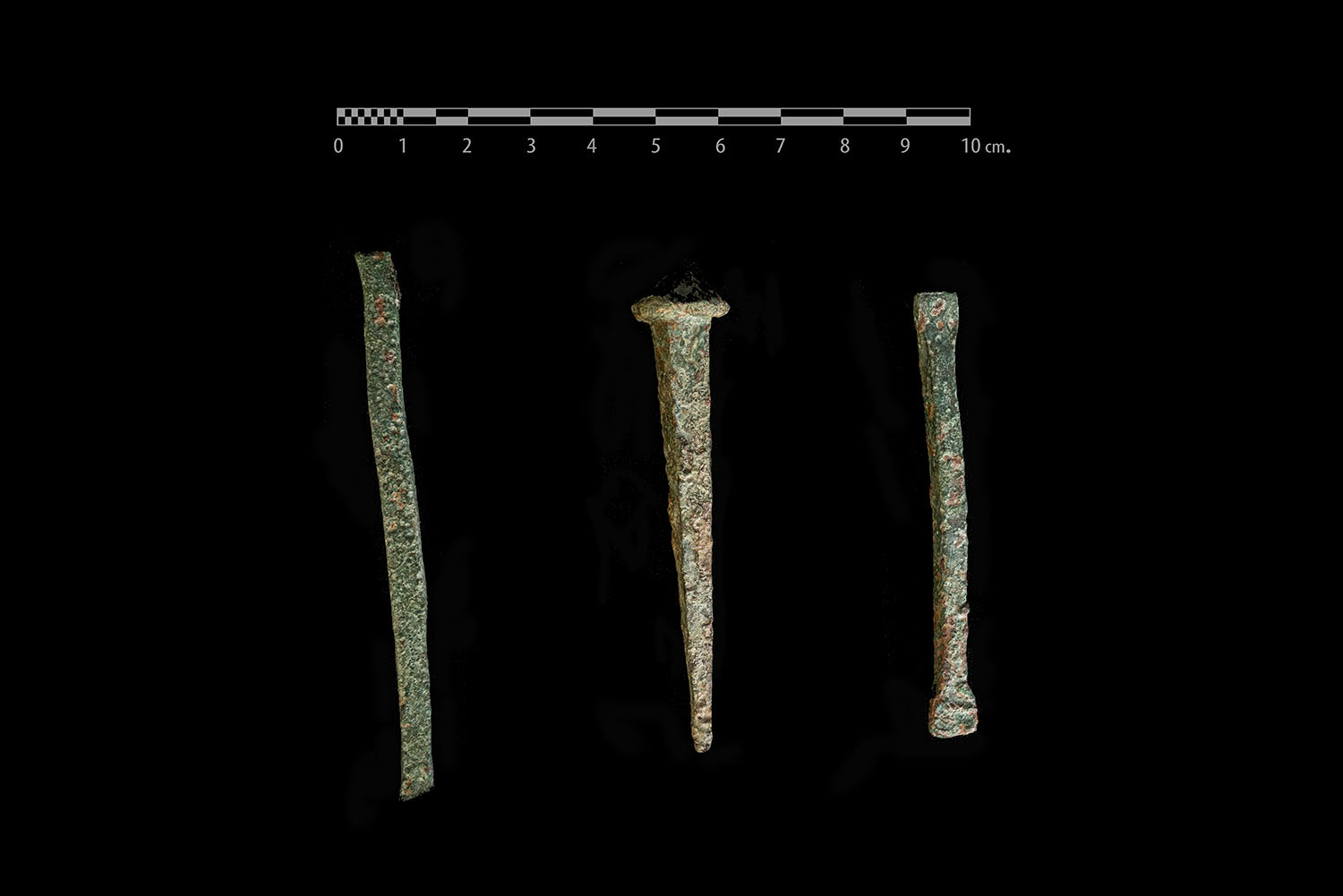 Functionality: Chisel: it was used for the carving of bone, stone or other materials.

Nails: they were used for the assembly and fastening. Spatula: it was probably used to prepare or mix liquid or semisolid substances.

Chronology: first third of the first century CE to the fifth century CE. 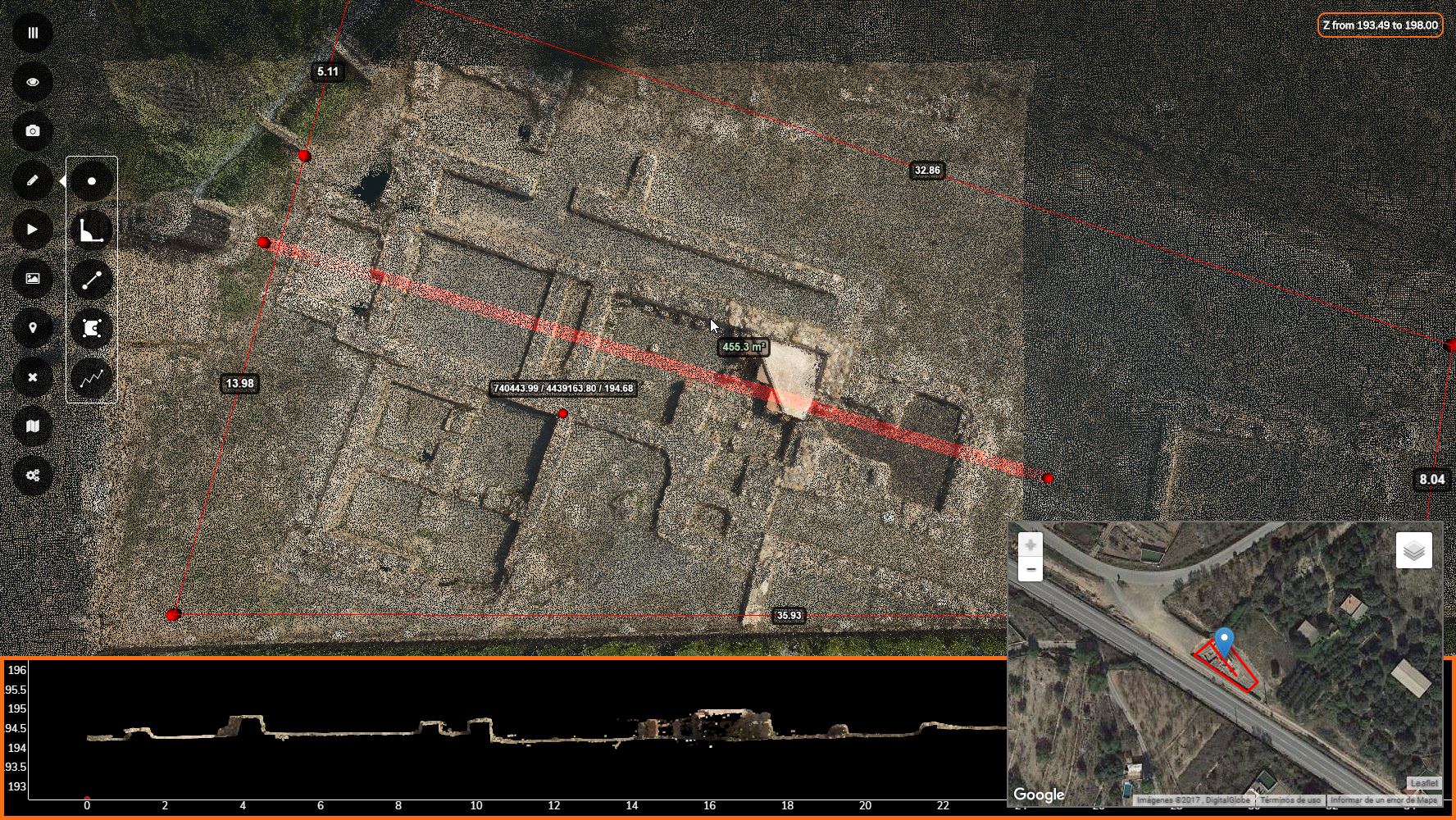 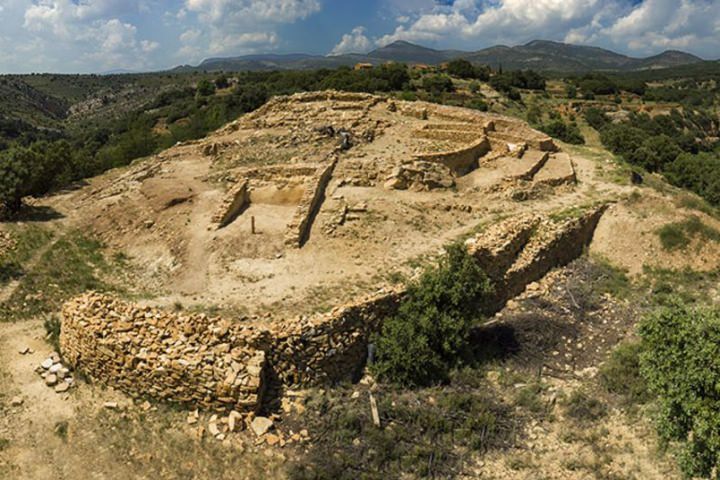 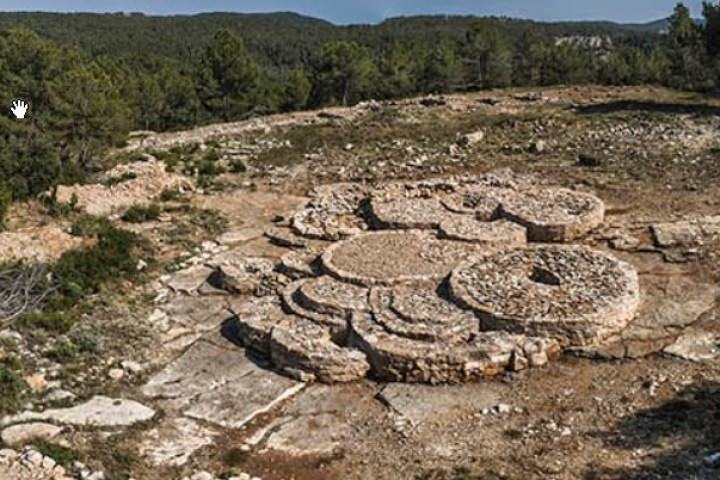 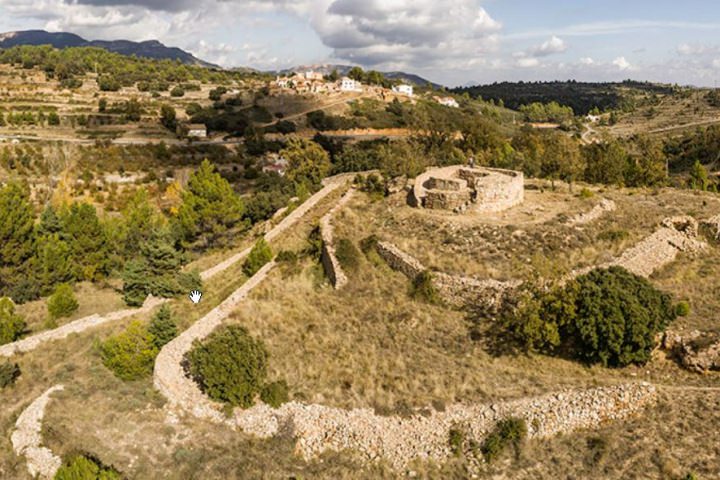