The site of the Puig de la Misericòrdia is a site of great interest that presents us two attractive moments of the Iberian culture, its beginning and its end. We can observe all three phases of occupation of the three dated by the excavations. The first one corresponds to the Iron Age, and the other two correspond to the Iberian Period. The second one is the most visible one after the excavation. It was surely a fortified residence with agricultural use. It might also have been used for a strategic purpose. It is probable that this place was an important enclave at that time, in connection with other surrounding settlements.

In addition, the Puig de la Misericòrdia is located in a beautiful natural setting where you can enjoy the surroundings and the views of the fertile plain of Vinaròs-Benicarló.

In the Puig de la Misericòrdia we find a singular Iberian settlement in which a residential or rural functionality and a fortified structure are combined.

The on-site excavations tell us about a chronocultural development, constituted by three different phases of occupation, corresponding to the Ancient Iron and Iberian Periods.

The vestiges of this stage are heavily destroyed. The site presents rectangular constructions built in masonry, with a chronology that covers the second half of the 7th century and the first half of the 6th century BC. The identified ceramic material is composed of handmade vessels decorated with typed strings. Next to the indigenous material, we find Phoenician imported ceramics, especially amphorae from the southern peninsula.

This period begins in the third quarter of the VIth century BC, and develops during the fifth century BC, and in the first years of the next century. Excavations have highlighted the area of ​​the defensive wall, whose walls exceed 4 m wide at some points. The access point to the interior of the enclosure remains unknown. This corresponds to the Ancient Iberian period, dated by the Greek pottery from 550 BC found on-site. However, pottery from the Phoenician trade is the most abundant, especially amphorae, jars and tripod plates, as well as fragments of bichrome vessels. As for indigenous ceramics, this corresponds to the first Iberian productions made using a potter’s wheel, decorated with bands and fillets, and handmade vessels for culinary or storage use.

After the abandonment of the site at the beginning of the fifth century, the site is again occupied, and a new settlement is built.  On this occasion, the urban approach is different, planning a small rural house with a main street. Given the presence of vessels of black varnish and italic amphorae, it can be dated to the middle of the century II BC.

This phase would correspond to a small agricultural settlement, as the archaeological material points out. Among these findings a billhook would indicate wine exploitation. It has been found abundant material of Iberian ceramics fabricated using a potter’s wheel and a few fragments made by hand. The pottery is decorated with bands, fillets, circular figures, waves and a few representations painted with birds and fish figures. The typical ceramic forms are Kalathos, also called "top hats" and vessels with "duck" rims, especially bowls and plates.

The architectural approach leads us to deduce that besides the agricultural character of the settlement, this may have had some kind of strategic function. We can not contemplate this place without taking into account the number of sites that existed around it, mainly in the Iberian Period. Not only those of the Puig de la Nau or the Perengil but others such as the Tossa Alta de Benicarló or Moleta del Remei further north.

The settlement was abandoned at the end of the 2nd century BC. 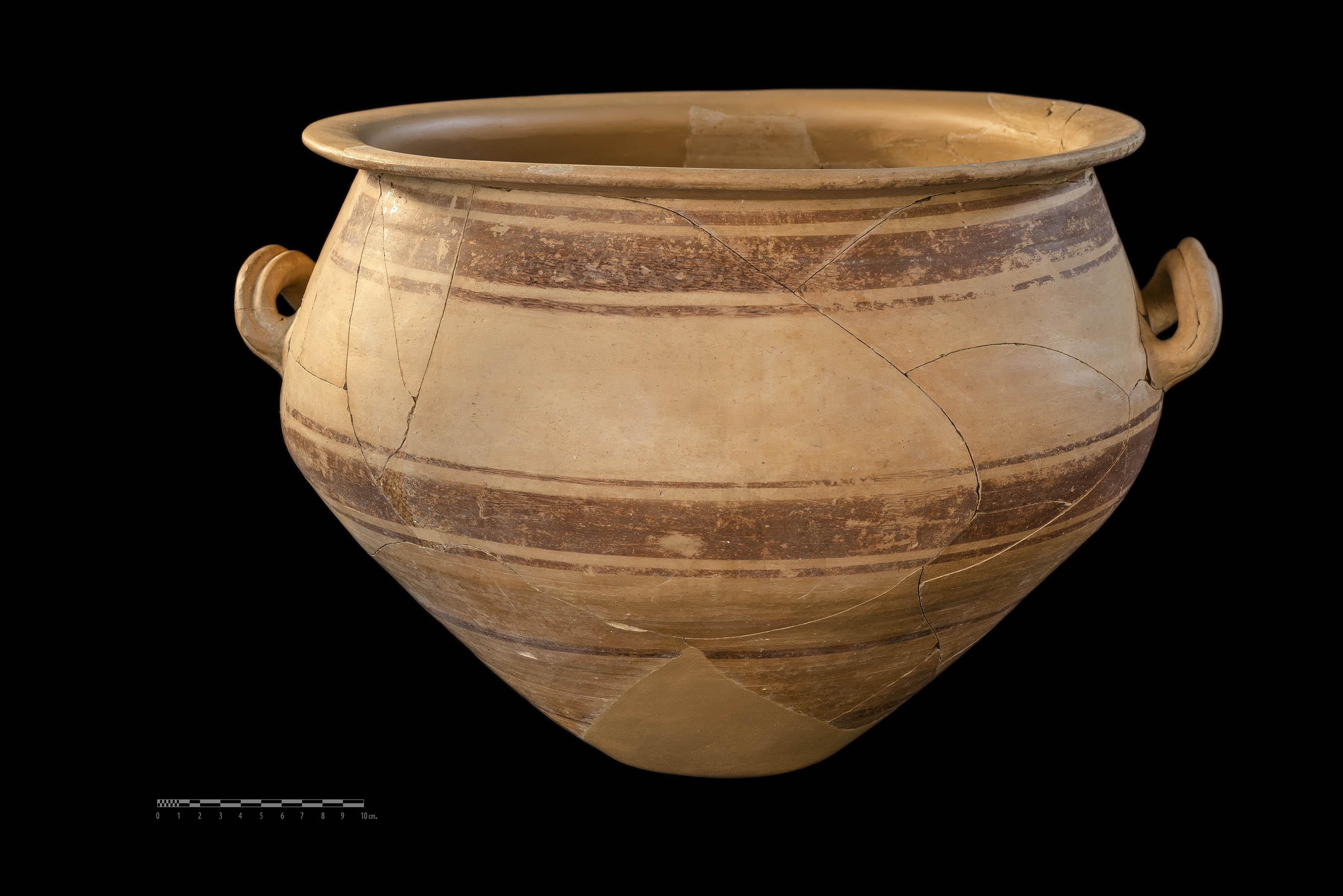 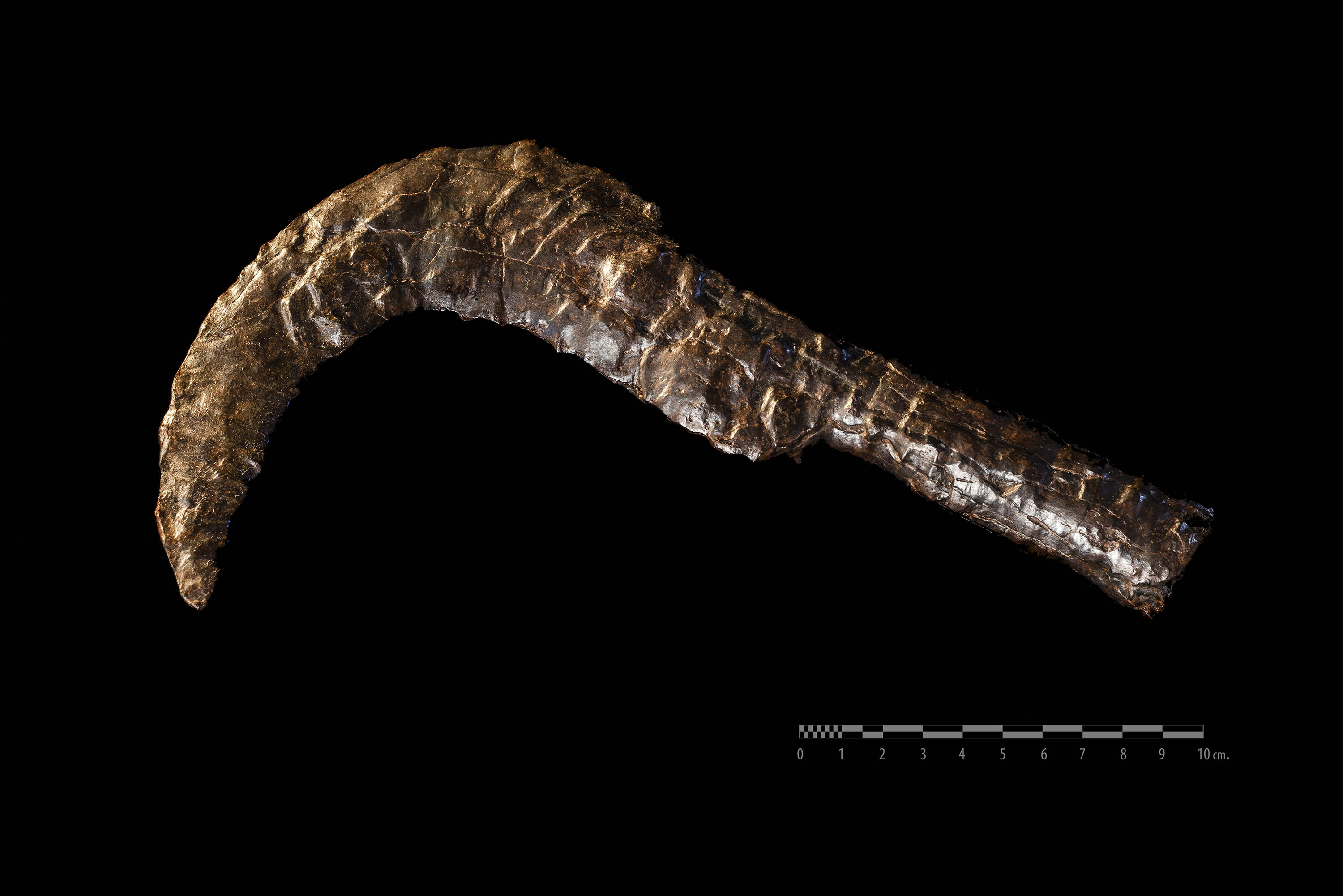 Description:  Iron billhook, both the blade and the handle. 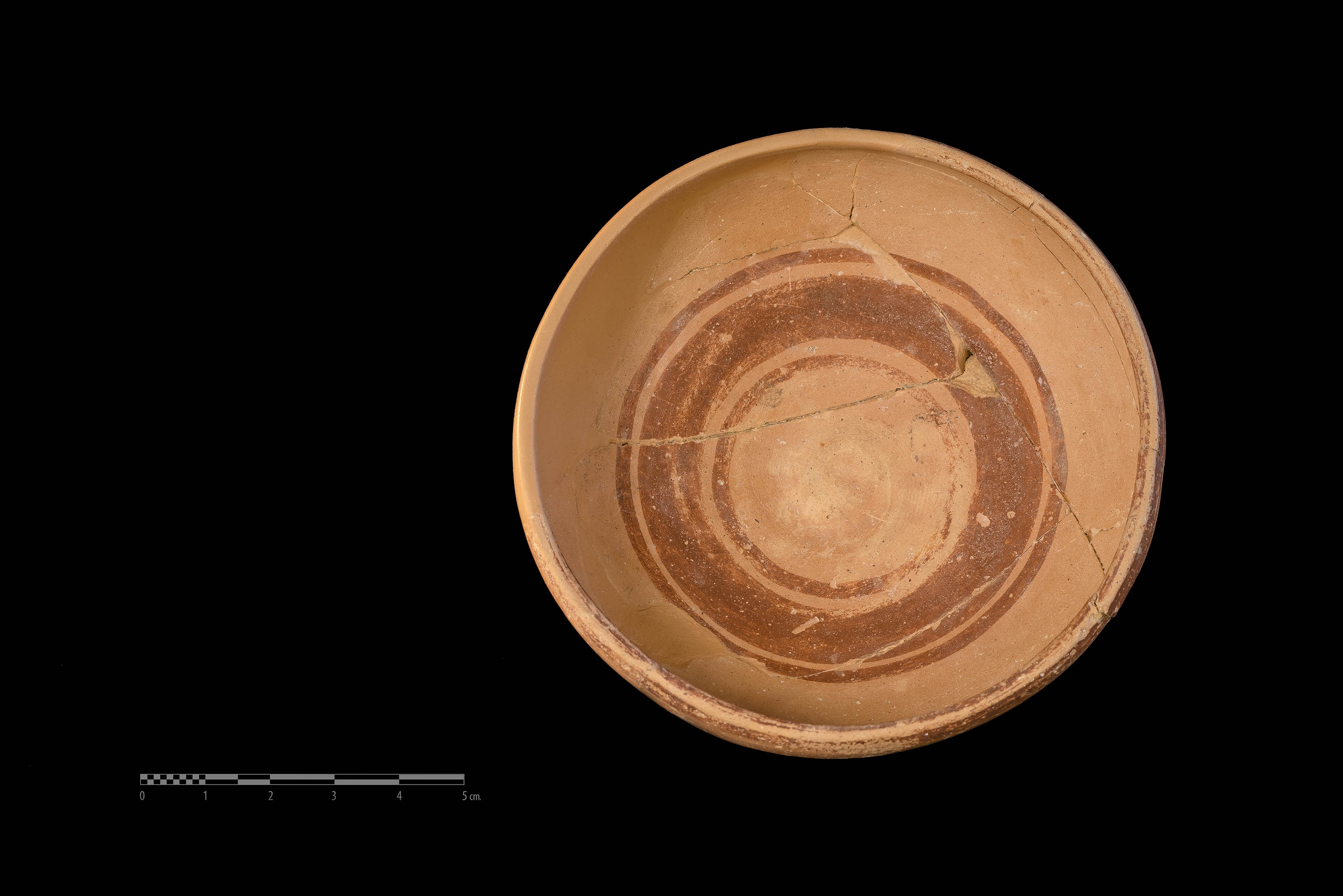 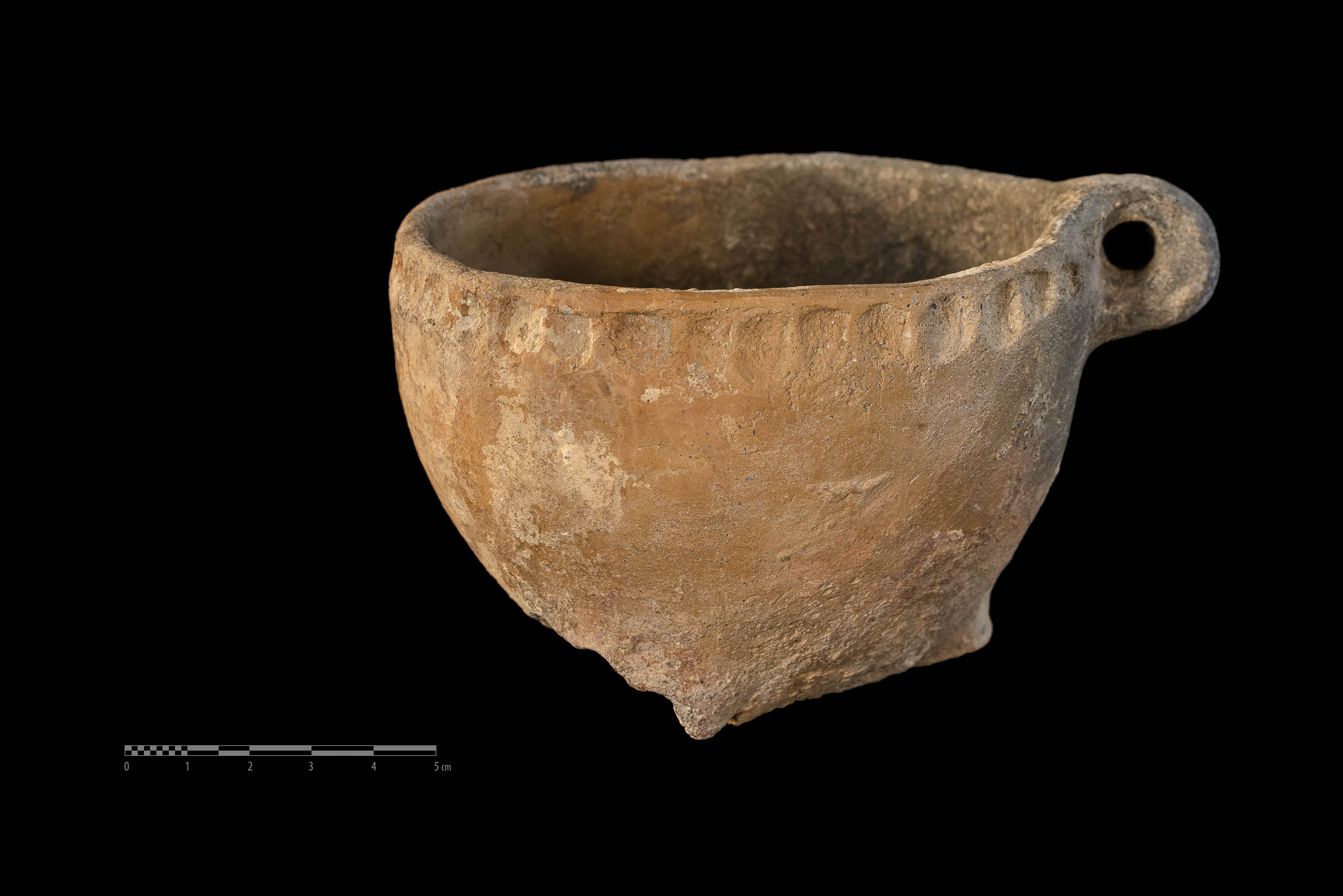 Description:   Ceramic vessel of hemispherical profile with a vertical handle. The base shows the start of three lost supports. It is decorated with fingerings on the outside rim.

Context:   The piece was found inside the fortified residence. More specifically, it comes from the collapse of the first floor of the building, an upper room that presumably served as storage area, since several containers of large volume and a great number of warp-weighted looms have been found. 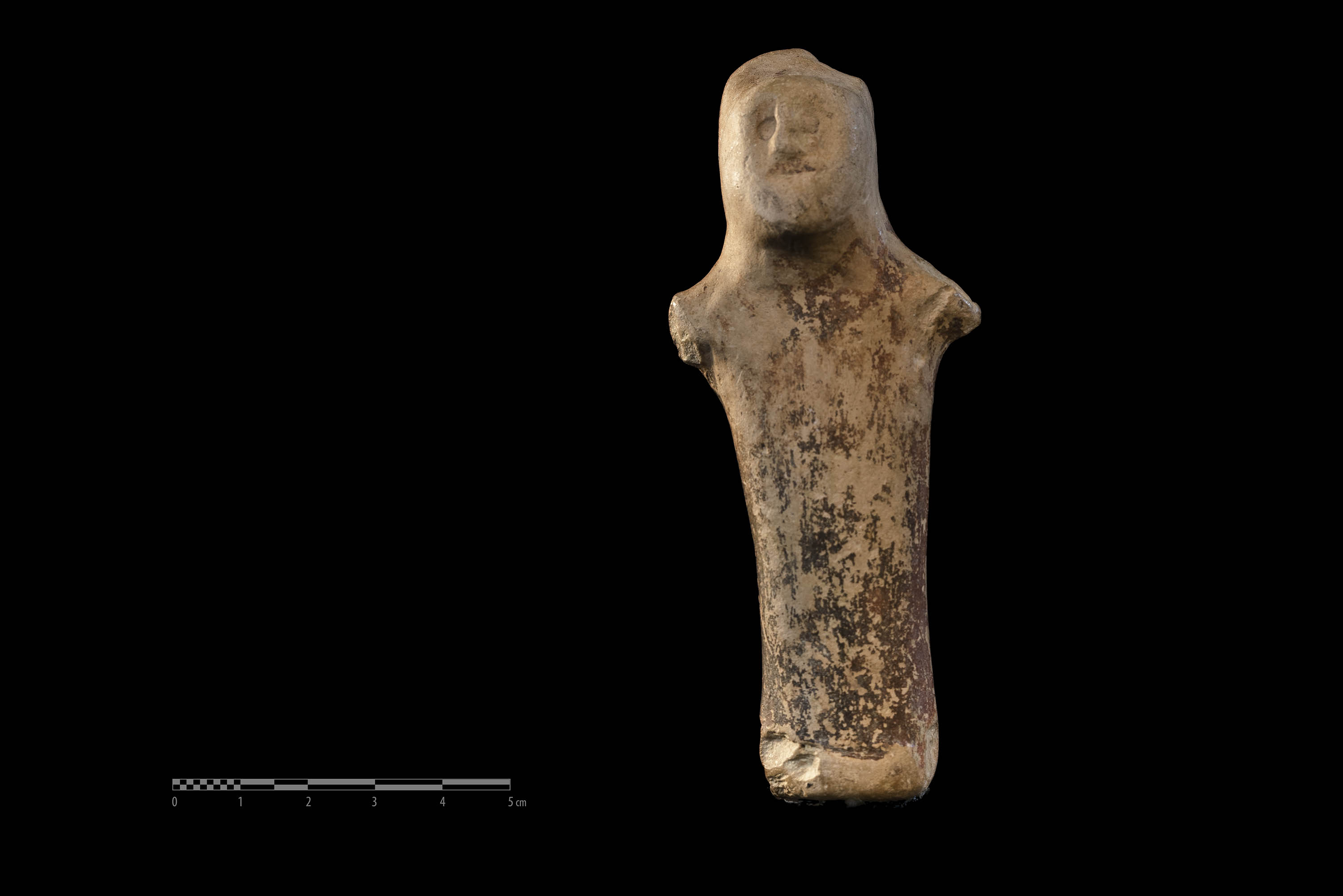 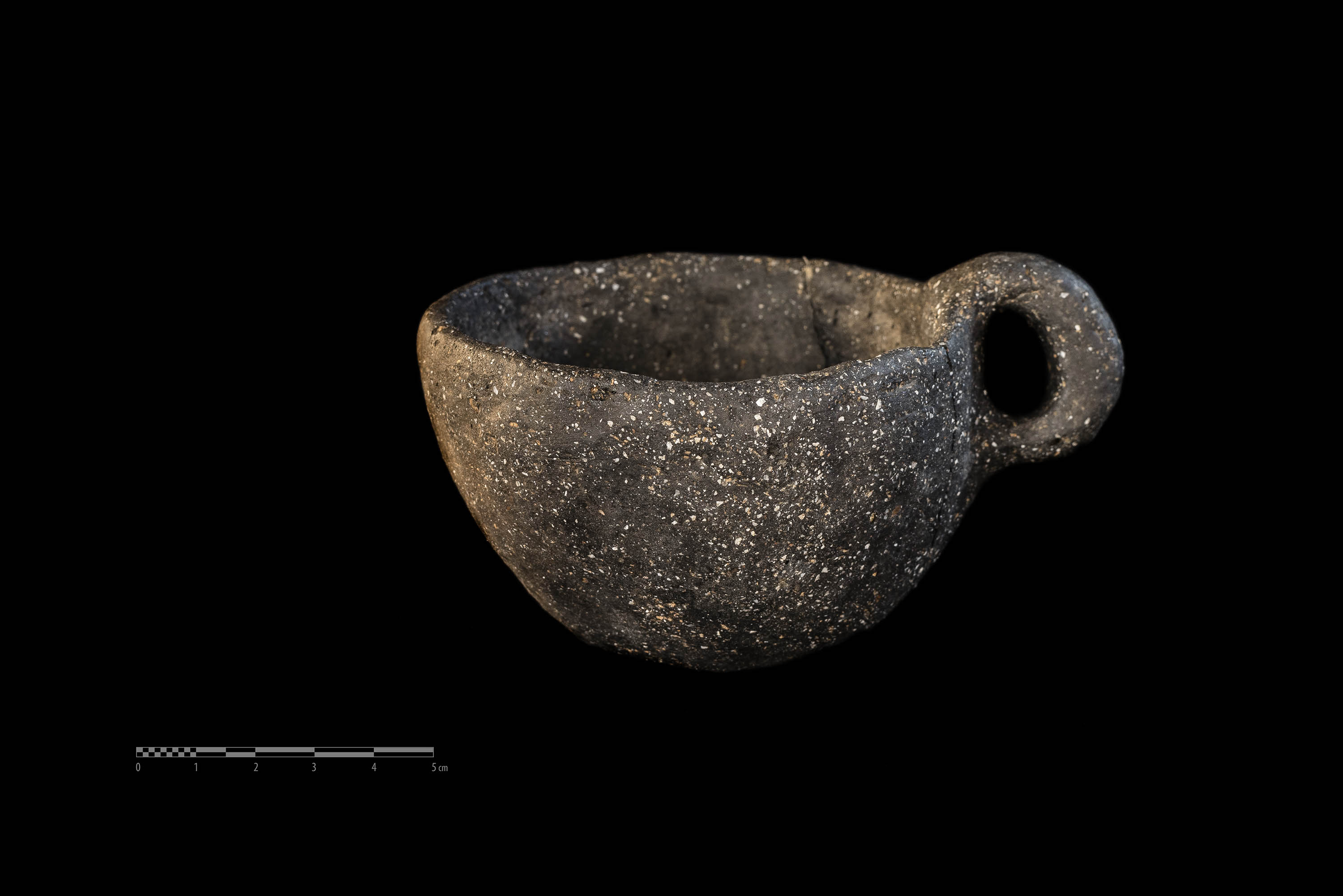 Description:   Made of ceramic. It represents a very stylized female figure, especially the body, which is simply a cylinder, although it is painted with the classic Iberian iron oxide. The arms are mere protuberances. The head is wearing a headdress. The features of the face are also very schematic.

Functionality:   Ritual, religious. These terracotta represent a divinity or are votive offerings.

Description:   Hemispherical vessel with rounded rim and concave base. Vertical ring handle that goes beyond the edge. Made of paste with abundant calcium degreaser. 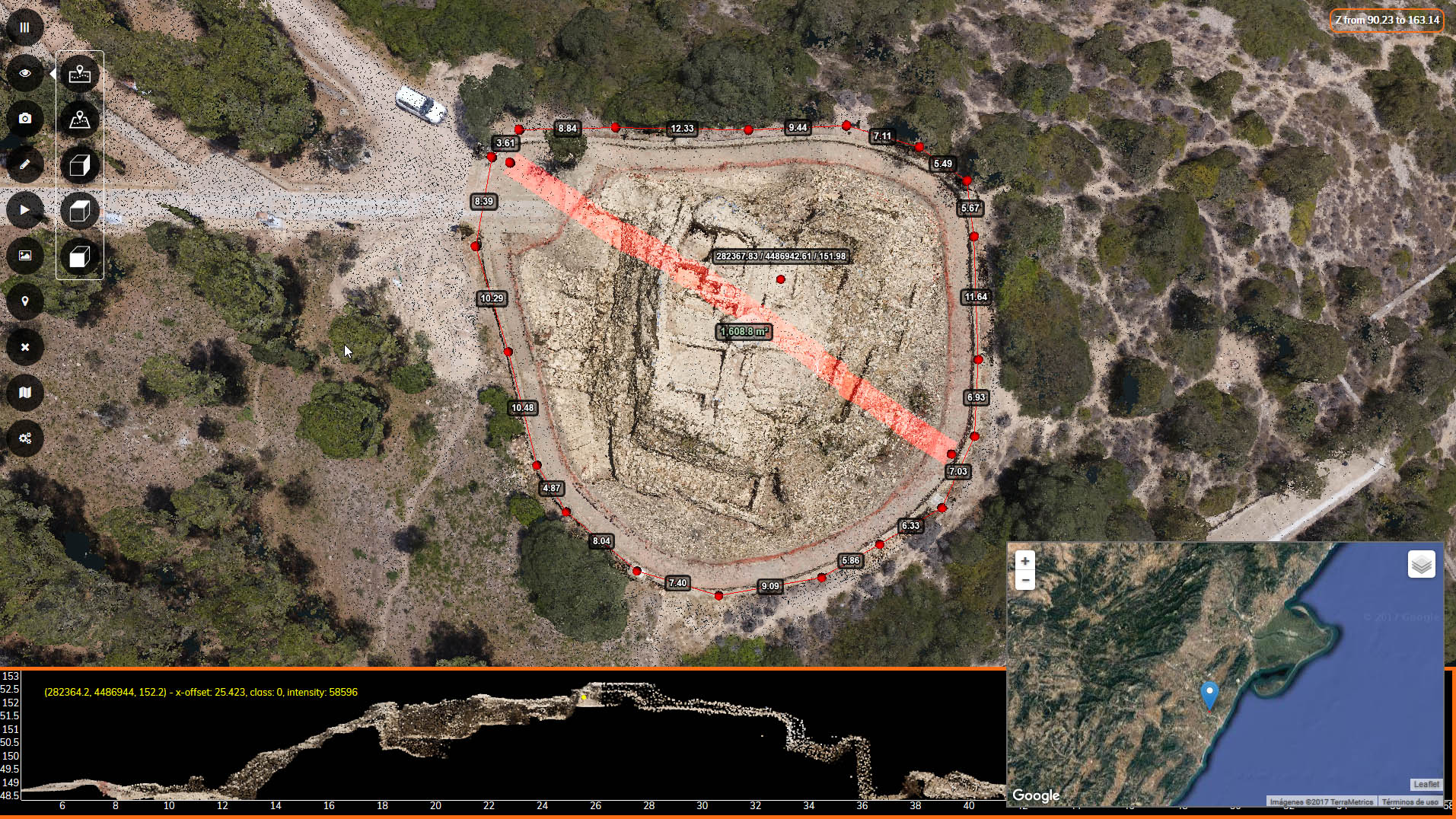 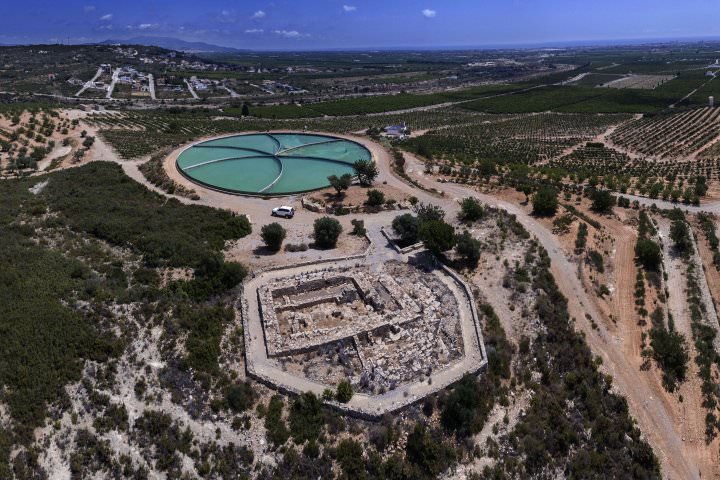 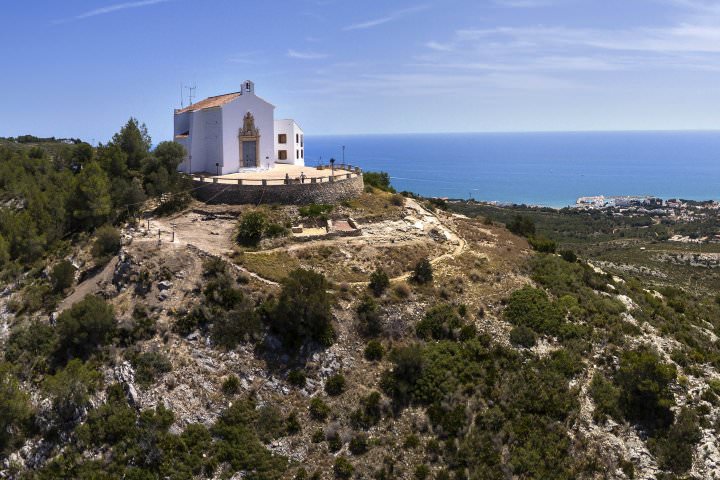