The site of Sant Josep, to the west of the town of Vall d’Uixó (La Plana Baixa), is a 1,600 m2 walled settlement whose chronology covers a period from the early Iron Age (7th c. BCE) to the 4th century and the first half of the 5th century CE. Sant Josep is located close to the church of the same name, high on a small hill above the river Belcaire.
The town became famous in the early 20th century when Juan Bautista Porcar, discovered prehistoric remains in the cave and Iberian remains close to the church of Sant Josep. Later, research began in 1974 under the supervision of the Archaeological and Prehistoric Research Service of Castellón Provincial Government. In the decades that followed, numerous studies were carried out to assess the site, always under the control of the Town Council, which owned it from the 1980s and was therefore in charge of managing any interventions.

Five occupation stages can be identified based on the remains found in the town. The first occupation phase is linked to a set of handmade pottery remains found outside the wall. A few of these fragments can be dated to the late Bronze Age, but most have been dated to the early Iron Age. The second and most important phase of occupation of the town can be traced to the Iberian era when the town spread over 3,200 m². According to the literature this occupation lasted from the 6th century to the 3rd or 2nd century BCE. It was at this point that the structures excavated in the 1970s were built. According to Manuel Rosas, the end of this phase was brought about by the Second Punic War (218-201 BCE), after which the town was abandoned. This was immediately followed by a period of Roman occupation in the second half of the 2nd century BCE and the first half of the 1st century BCE. A brief - fourth - occupation was documented in the 3rd century CE, connected with a period of crisis affecting other nearby sites such as the villa of Benicató in Nules, while the last occupation phase spans from the late 4th century to the first half of the 5th, when some of the dwellings at the top of the town must have been occupied. 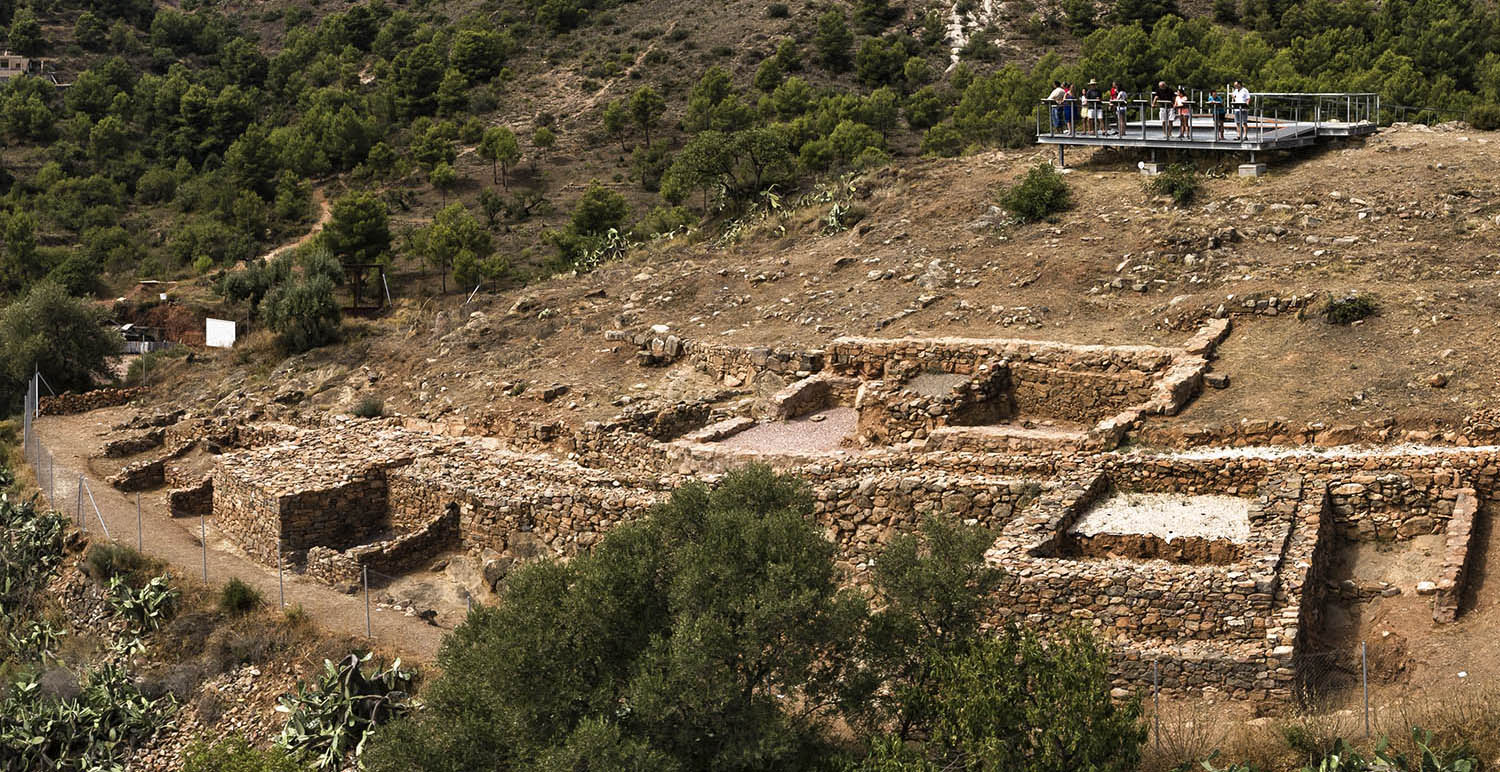 Start of the campaigns

The first archaeological excavations were carried out in the 1970s, when the southeast sector of the site was dug up and different architectural elements documented, including a section of defensive wall with two square towers which protected the east side. The location of this settlement is strategic given its geographical location, its proximity to water resources and its defensive and surveillance purpose for the territory. These constructions were adapted to the topography of the region, taking advantage of the cliff over the river as natural protection to the south and west, while a wall created to the east also closed off the north side.

In terms of the function of the site the documentation of numerous fragments of imported Greek pottery in the early Iberian suggests that this was an important building inhabited by the Iberian aristocracy. The changes occurring in the Middle Iberian period changed the function of the site to that of a point for surveillance and shelter, possibly depending on the city of La Punta de Orleyl, also in Vall d’Uixó. In this respect it should be noted that from Sant Josep it is possible to keep watch on the water from the underground river, the entrance of which is located at the foot of the hill, as well as the surrounding farmland and the route to the valley of the river Palancia.

One of the last interventions in the town was in 2014, when both towers and the wall were excavated, making it possible to document the various construction phases. The first is characterised by the construction of Tower B, on the south end of the excavated area. This tower had a square floor plan and the interior was filled with stones. The first line of wall was built in the second phase, springing northwards from the north face of Tower B and the length is documented as 20 m. In the third phase Tower A was built with a square floor plan and double-face masonry walls, leaving the interior empty and usable. In the fourth phase the defensive wall was reinforced with the construction of an adjoining wall in the section between both towers. In the fifth phase Tower A was reinforced with the construction of an adjoining wall on the outer face. In the sixth phase a wall was built to reinforce the wall in the section excavated to the north of Tower A. Subsequently a series of walls were built adjoining the smaller wall.

The defensive system documented on the east side is composed of two watchtowers and a defensive wall which continues along the north sector. The town was 1,600 m² and buildings were built outside the walls at a later stage

Although most of the stratigraphic layers excavated in this campaign were already documented in the 1974-75 campaign, some very important information has been obtained, including the existence of four groups of pottery remains which correspond with different phases of occupation of the site. The first group was made up of handmade pottery found in most units. Many of these items, such as pots, lids and jars, date to the early Iron Age. However, the most frequent remains are without a doubt from the Iberian era. There are numerous fragments of plates, jars, amphorae, goblets, calathus1 and pondus2, as well as pots, lids and a fragment of Attic pottery.
Some of the fragments of remains which were documented in different stratigraphic units were dated to the period between the 1st century BCE and the 1st century CE. These include fragments of amphorae and fine pottery. This third occupation was linked to Romanisation between the second half of the 2nd century BCE and the second half of the 3rd century BCE, as in Villa d'Uixó or Horta Seca, located 2 km east of Sant Josep. Finally, in one of the units excavated the pottery appears to date from the late 4th century and mid-5th century, coinciding with the Late Roman period described by the different authors who have published on the materials of the 1974-75 excavation in Sant Josep.

As we have seen the settlement was protected by a masonry wall reinforced with square towers, two of which are still conserved, and projecting.

The excavation work has uncovered extensive remains from different eras in metal, glass and pottery, including amphorae, pots, luxury tableware, plates and glasses

In the first phase of occupation the decision was made to build inside the walled complex although in this case different construction periods can also be identified. Inside the walled complex there are a series of rectangular quarters separated from the wall by a space for circulation. In 2014 work began on the conservation and restoration of the site with the participation of the team from the construction module of the Sant Josep Employment Workshop, the technical team of the department of Urban Planning of the Town Council of Vall d'Uixó and the Municipal Archaeological Museum. This work continued in the 2016 campaign, with the team from the Sant Josep Employment Workshop II. During this campaign the area situated north of Tower A was excavated and different structures such as the continuation to the north of the circulation space, a section of the east wall and three departments were documented. This area is closed to the north by a different section of wall. The excavation of Department 1, initiated in 1975, was also continued. 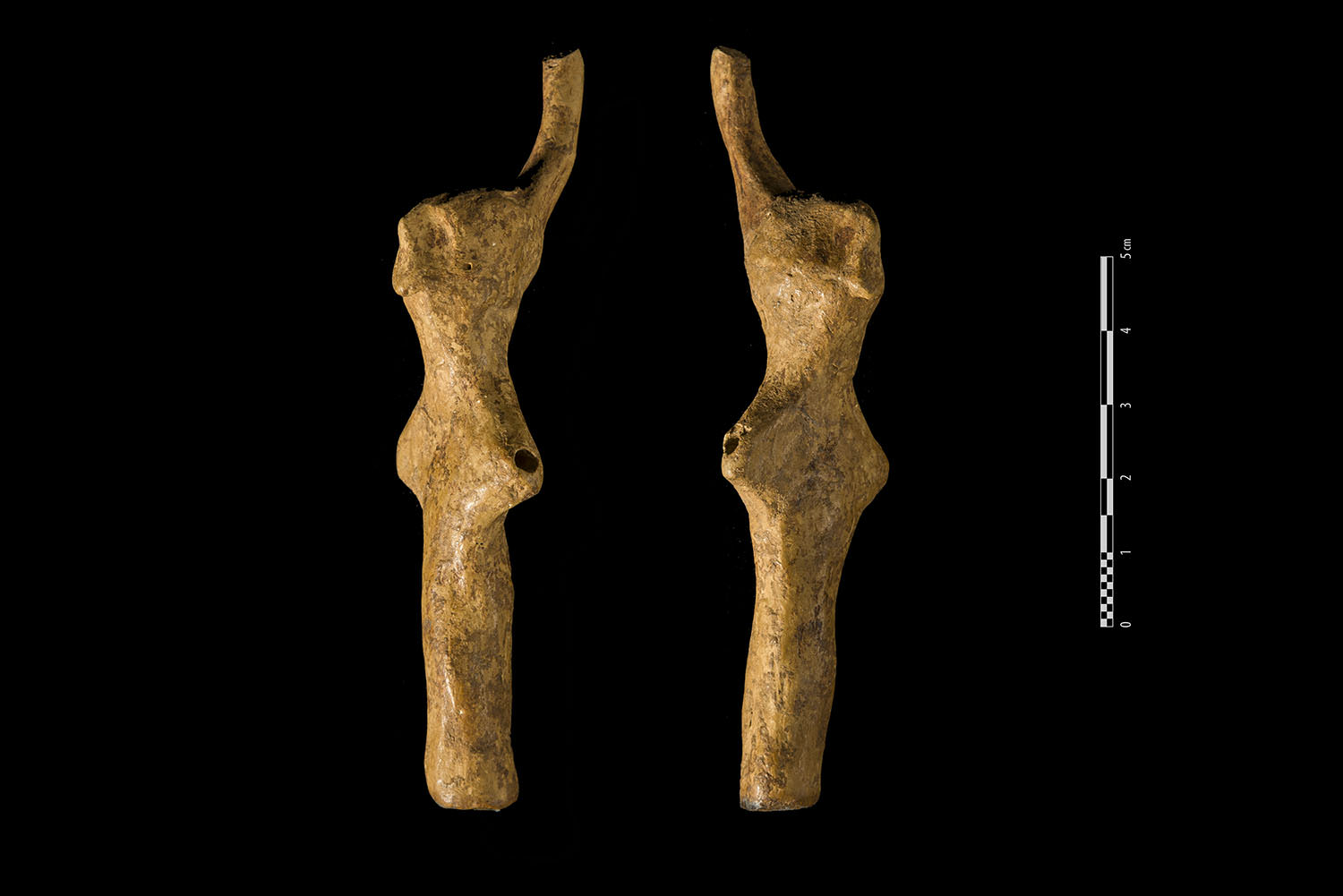 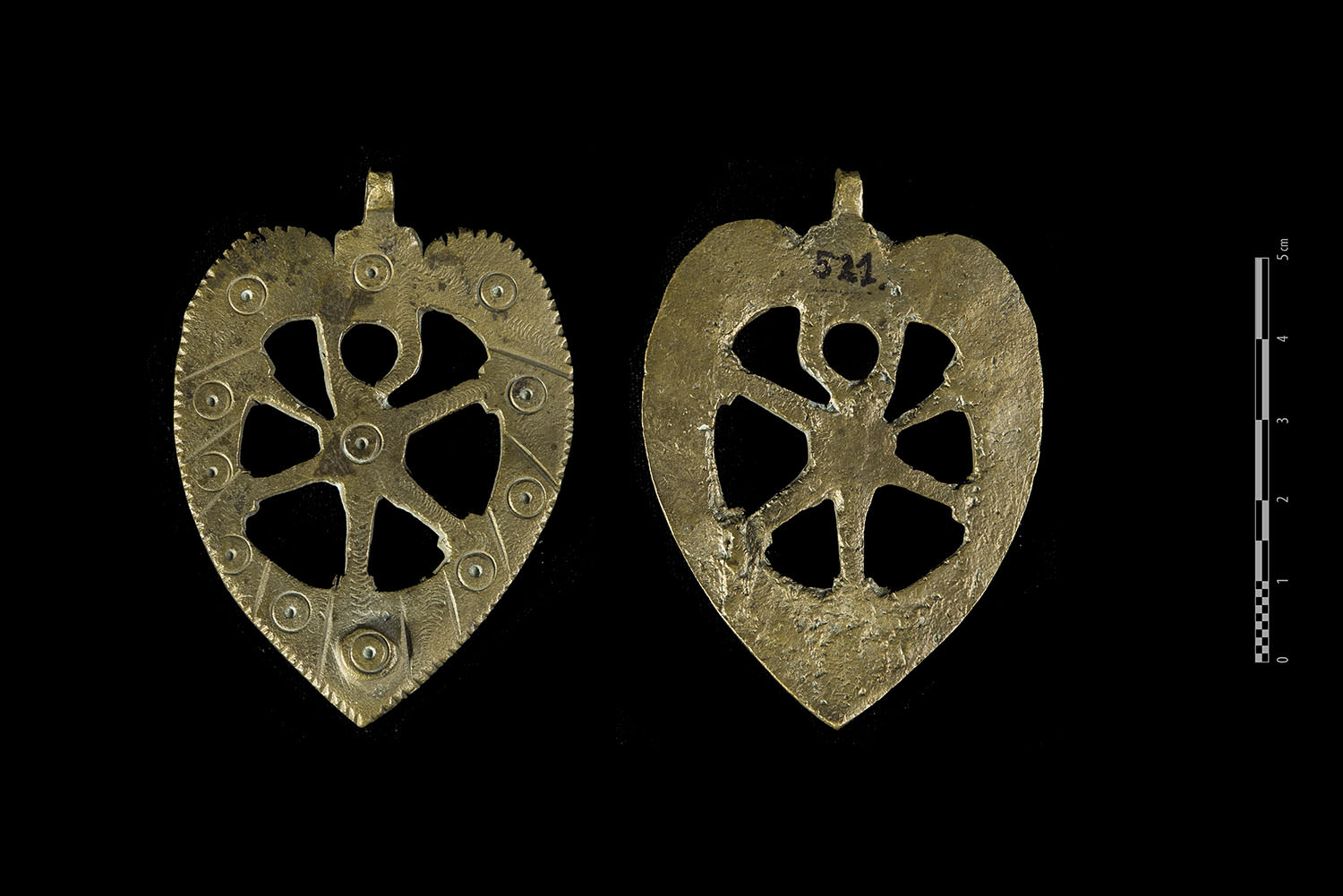 Description: Representation of a woman with headdress. The body is highly schematic. There is a perforation at shoulder height and another at the base of the headdress for threading a cord for hanging. Clay.
Functionality: Religious, possibly a representation of a goddess or ex-voto.
Context:  Wall area, from the filled-in layers.
Chronology: 2nd-1st c. BCE
Technique: Handmade.
Dimensions: 103 x 27 x 23 mm.
Reference: Museo de BB.AA. de Castellón, inv. no.: 426 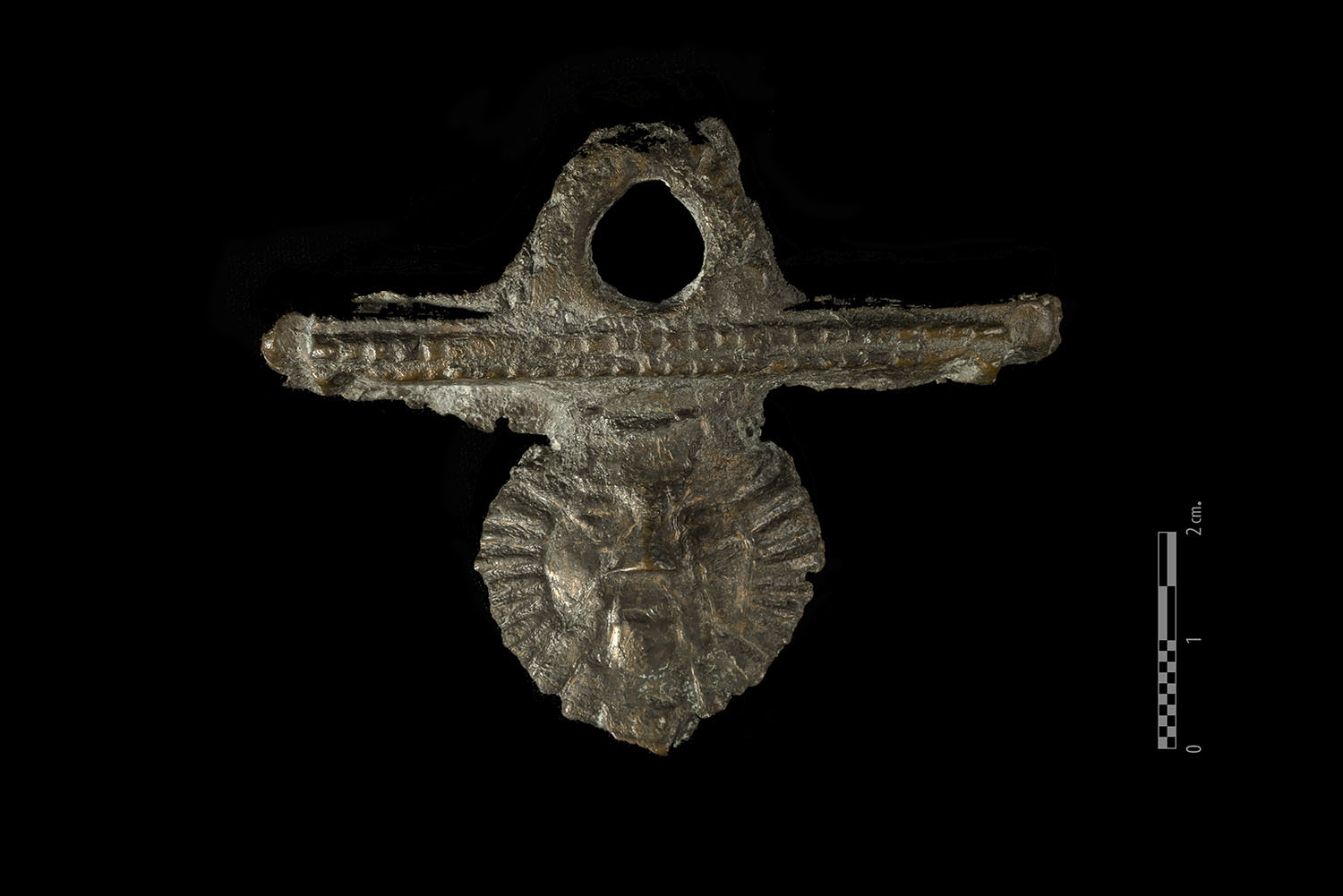 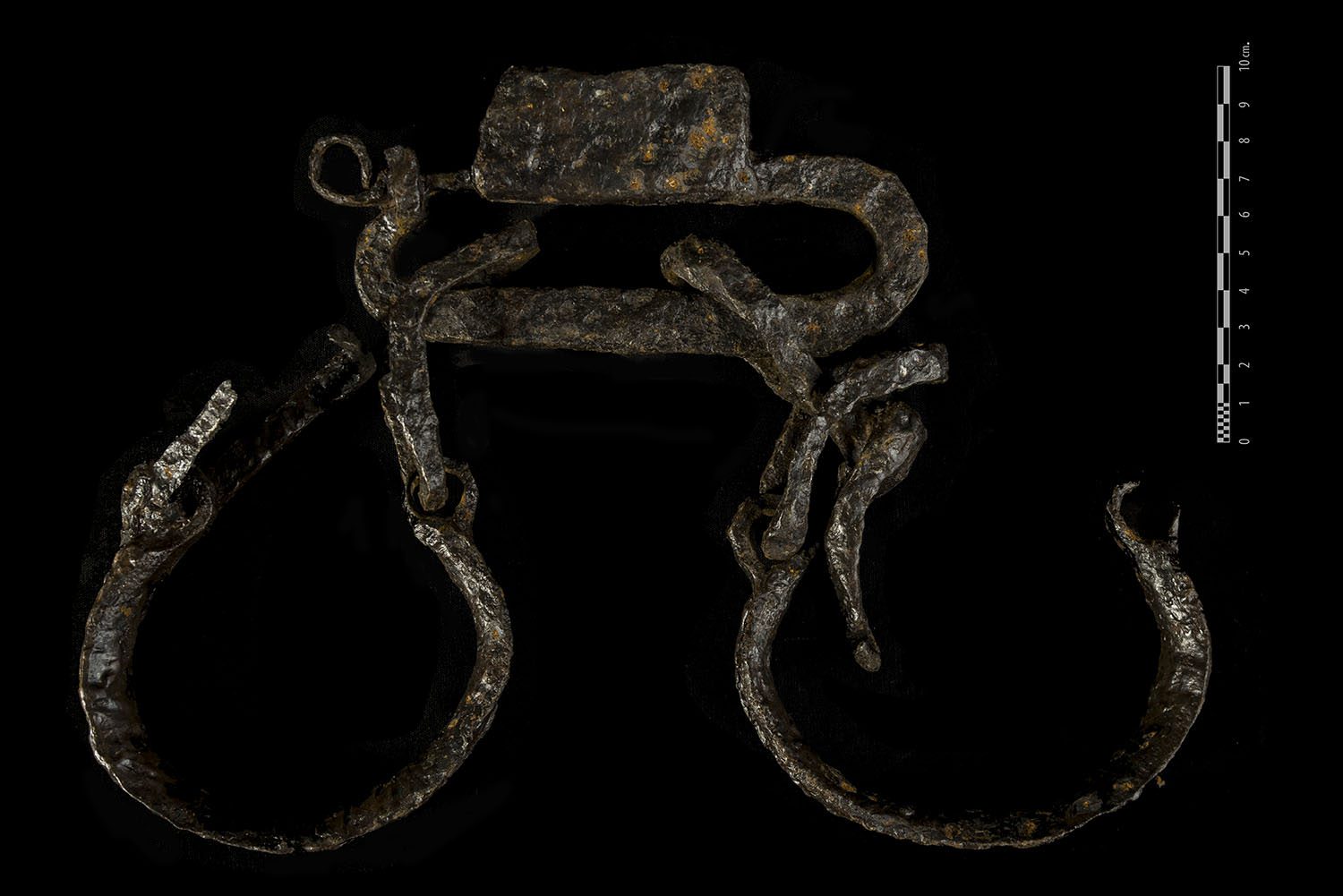 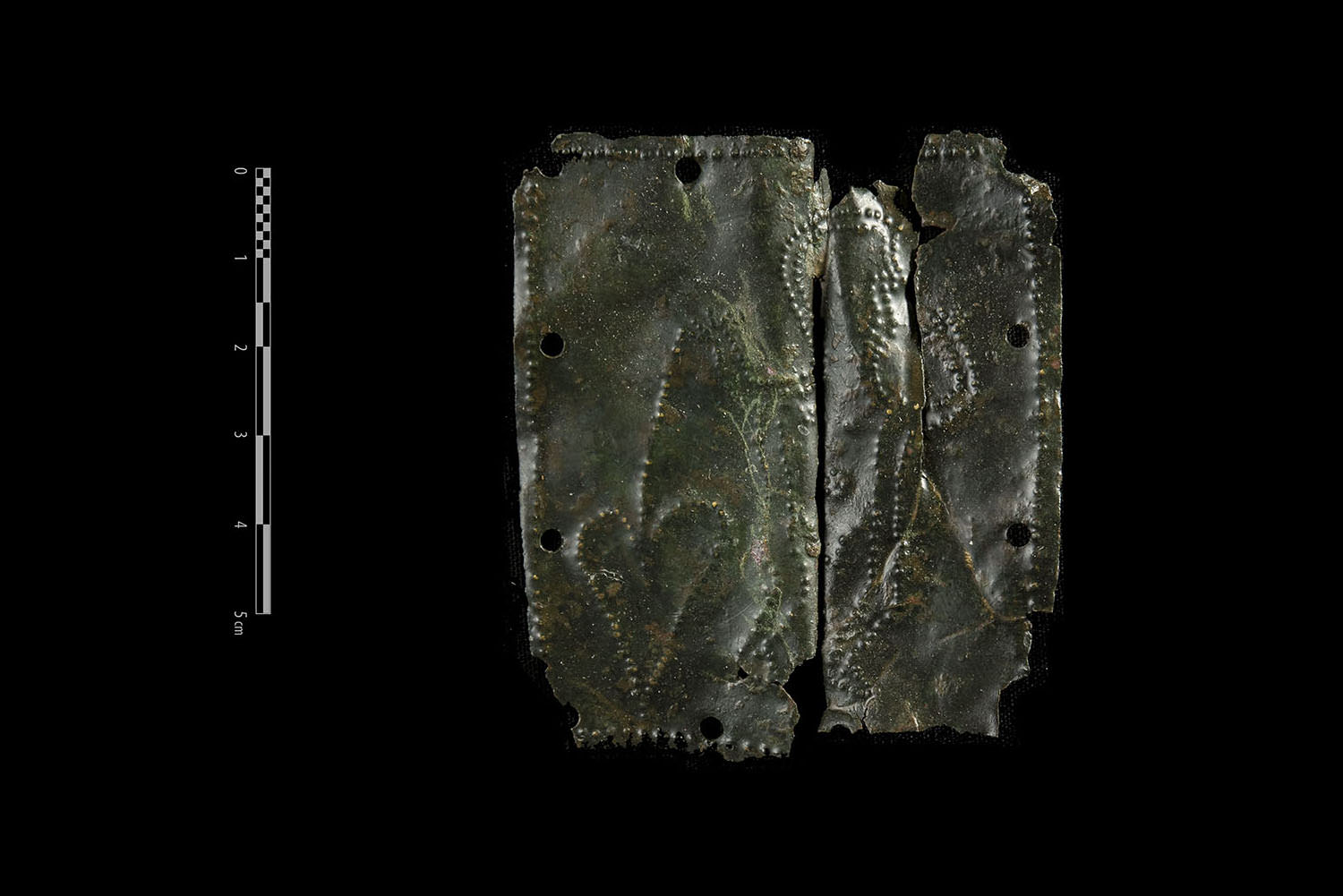 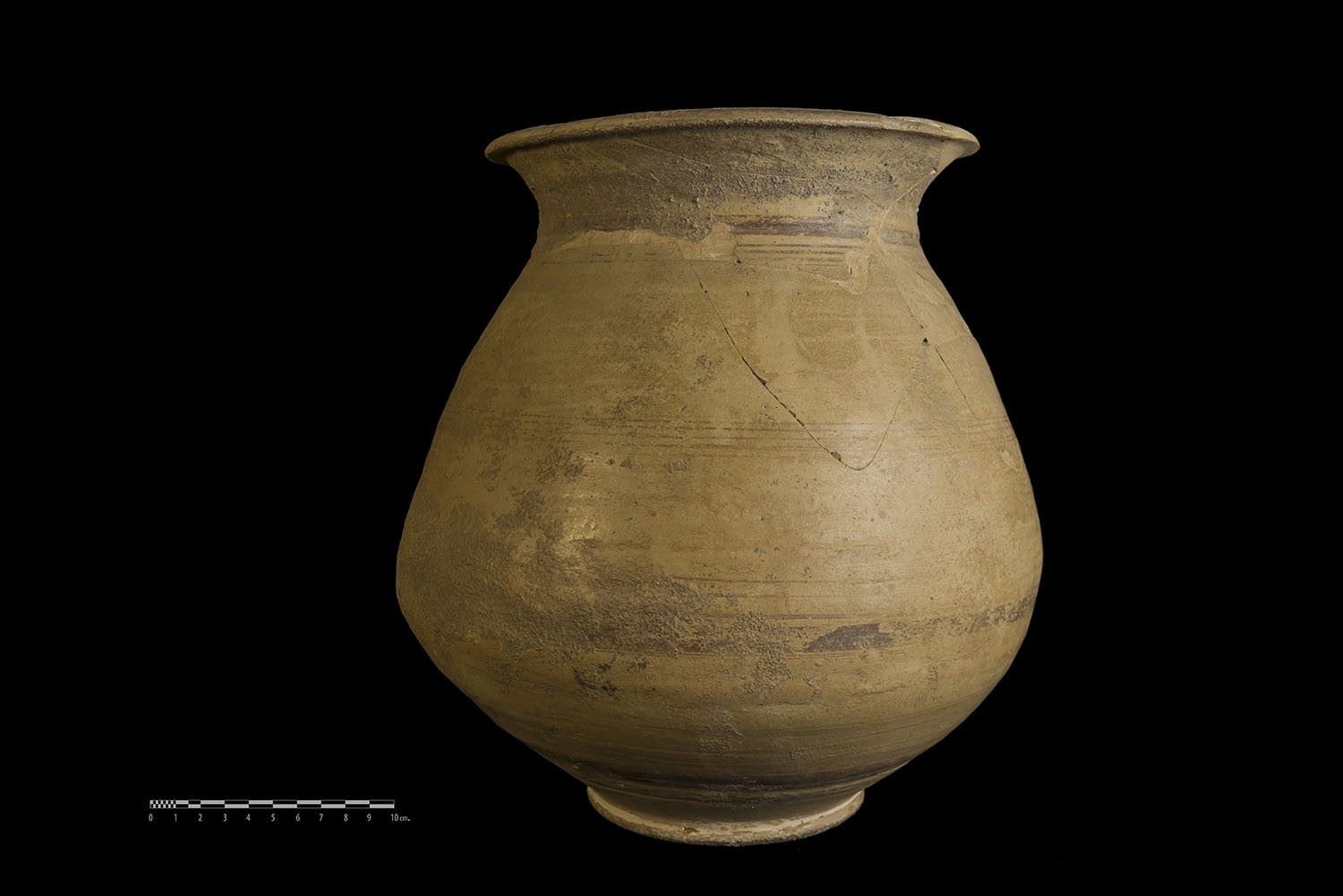 Description: Bronze sheet featuring an anthropomorphic figure with childish design, bearing an ivy leaf. Both the design and frame are punched out. There are two circular holes on each edge, presumably for attaching this sheet to a piece of furniture of some description. Therefore this is part of the decoration of another object.
Functionality: Decorative cover for furniture.
Context: Filled-in layers by the wall.
Chronology: 3rd-2nd c. BCE
Technique: Embossing.
Dimensions: 52 x 70 x 1 mm.
Reference: Museo de BB.AA. de Castellón, inv. no.: 2033 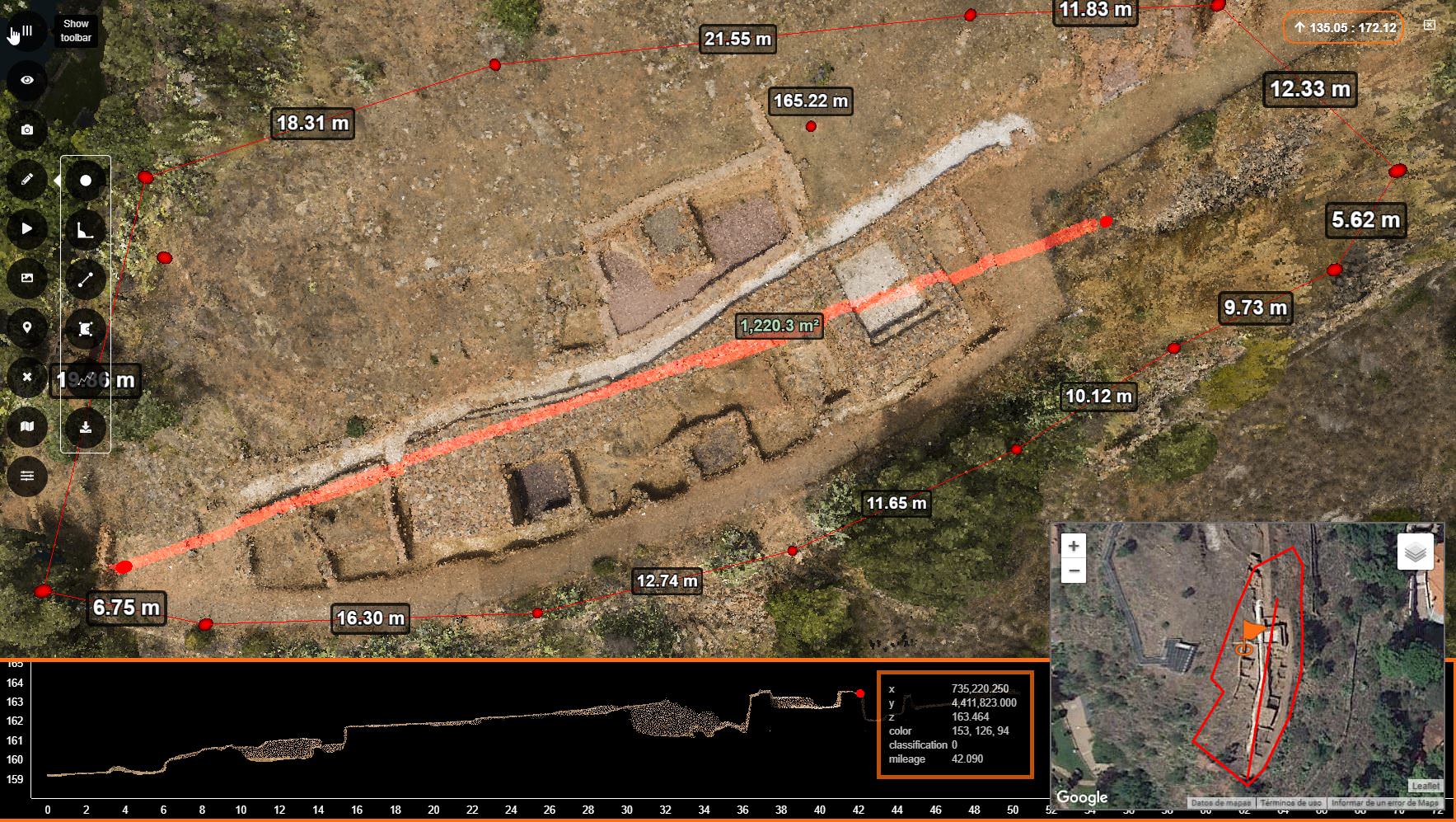 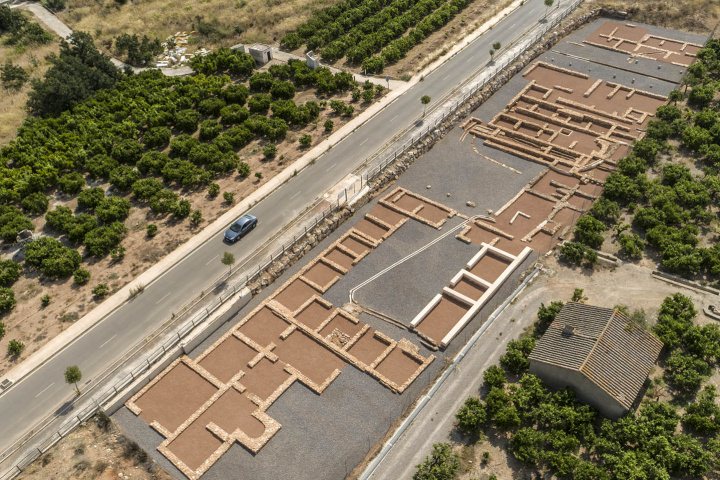 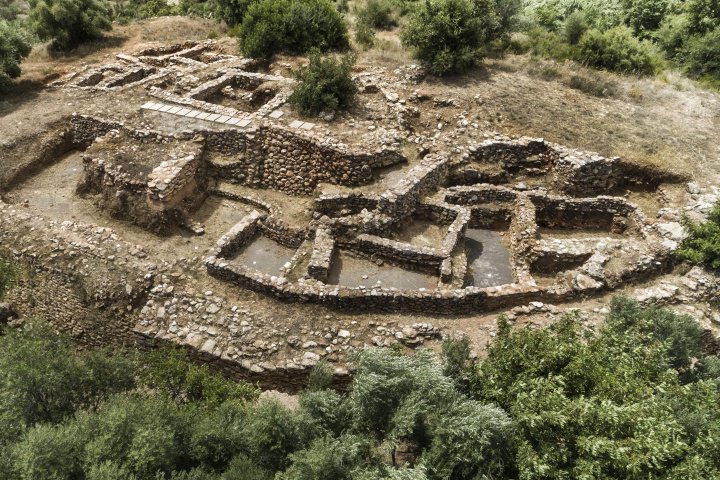 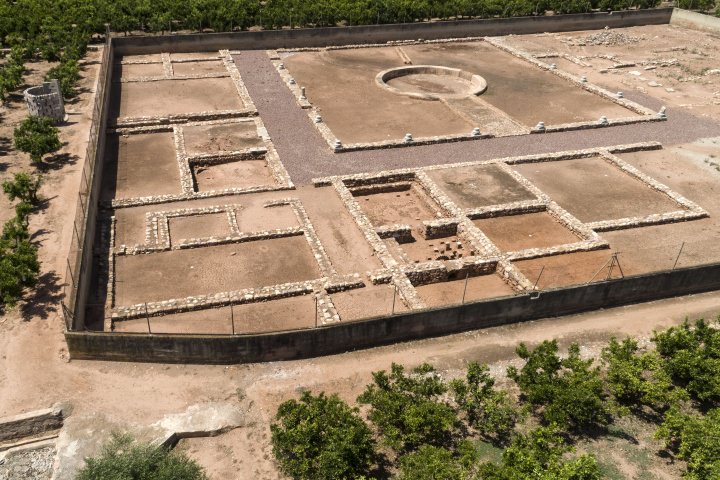