INDEX >NEWS >THE MEMORY OF STONES

The memory of stones

Through a look at rural Spain, which had its back turned to its archaeological treasures, this article reveals to internet users the coincidences that led to the discovery in 1876 of the Roman city of Lésera in Forcall, Castellón, Comunitat Valenciana, Spain, Europe.
The publication, adapted in 3 languages, uses cutting-edge technologies to show the current state of the site in 3D, bringing together all the findings in a single medium and displaying simple documentation by period. It also offers a virtual guided tour of the reconstruction of the fully excavated domus of the triclinium, from this 3D model we can go on to view the entire site, as well as the virtual recreation of the domus, or download the mapping of the enclaves with CC-BY-NC 4.0 licences.
The material, also adapted to accessibility (card and tactile model with Braille), includes a digital print of the 3D model of the domus, ideal for blind visitors. This is an informative treasure for all audiences and ages, with various reading levels, due to the simplicity of its handling, even for people with functional diversity, which could well form part of an educational tool and a pretext for a digital cultural gymkhana. 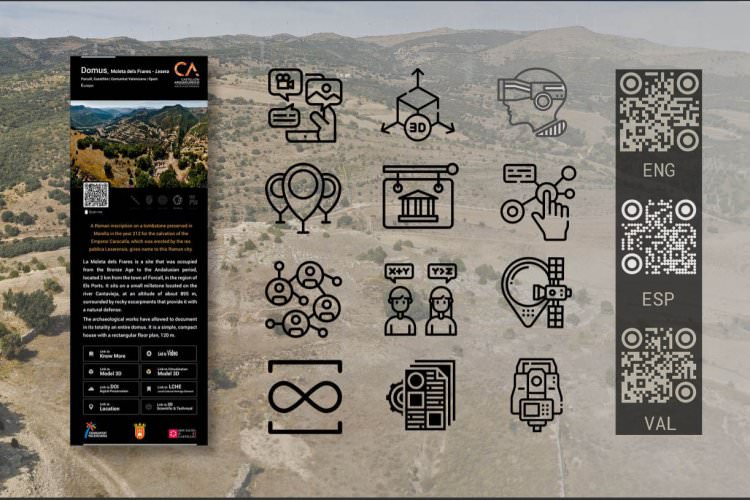 The memory of stones

“Search for little buttons on the ground, each one you find I’ll give you a handful of walnuts” and at just 6 years old, while guarding the sheep, with the same stick with which he used to whip the cattle, that child was unknowingly turning the earth to look for Roman coins, without imagining that that hill, where the sun rises every morning, was home to the Roman city of Lesera. Nor did the children who were lucky enough to go to school in Forcall know that when the teacher was telling the history of ancient Rome, using simple tools such as chalk and a worn-out blackboard, barely 1.5 miles from that freezing classroom there was a complete Roman city, plundered, of course, by the vicissitudes of history.
Lesera was eaten up by ignorance and silence. Its limestone ashlars ended up in lime kilns and its architectural elements were reused, as usual, to build houses and terraces. Located on a hill, the entire estate belonged for centuries to the Dominican convent of Forcall, which is why it was the Forcallans themselves who christened the place “La Moleta dels Frares”. With the confiscation of the church lands in the 19th century, Liborio Molinos, a wealthy landowner in the area and grandson of the family who had leased these lands to the church for years, managed to buy the estate for farming. While he was transforming the land and, without expecting it, he unearthed an alarming amount of treasures: coins, friezes, ceramics, household goods… for this reason, and without Liborio being a man of great learning, he asked the children of his workers to look for “little buttons” to exchange them for a gift that the little ones considered disproportionate to the insignificance of the find.

It was by chance that Lesera was condemned to silence, when in 1876 the site was made public by the professor of Surgical Anatomy at the University of Valencia, Nicolás Ferrer i Julve, who operated on Liborio Molinos’ mother for cataracts and who, aware of the doctor’s archaeological interests, revealed what was happening there. Lesera began to be mentioned, albeit with a vague name, in cultured circles and so began the first investigations, tastings and public interest, which unfortunately also led to furtive plundering for a century, until in 1998 the site was declared LCHE (Local Cultural Heritage Element) for its protection.

Abandoned, destroyed, decayed, raped and buried, Lesera has a lot of undiscovered history. The archaic city that lived its splendour for 3 centuries (from 14 BCE to the 3rd century CE), now receives the embrace of the fourth technological dimension, 3D technologies that offer to preserve its discoveries and serve as a powerful platform to put together the pieces of its erased and scattered history. An inscription found in Morella finally reveals its name, Lesera, which achieved city status at the time of Emperor Augustus.

We know little about Lésera because only a few hundred of its 839584.98 square feet have been excavated. However, we are left with the peace of mind of a law that protects the site and the wisdom of the archaeologists, as well as the enthusiasm and dedication of the director of the excavation, Ferrán Arasa, who will not allow any more violations. This impressive archaeological work now has its mirror in 3D technologies to give us, as Internet users, a very special journey to a unique corner of the planet. The luxury of being able to fly like a bird over the “Moleta dels Frares” and get to know the scale of the site, navigate through the different stages of its history by means of simple cataloguing sheets, have all its findings brought together on a single support or enter the domus of the triclinium, completely excavated and reconstructed in virtual reality, is a gift provided by the AD&D 4D association. It is true that the place is enchanting, but even more so when these reasons for fascination come to us comfortably from the place and time of our choice at the click of a button, by activating, for example, the phone in our pocket.

The 3D model of Lesera, published in Europeana, insists on the need to democratise knowledge and break down not only digital barriers, due to the simplicity of its use and language, but also to advance in barrier-free communication for the visually impaired, through audio guides and 3D printing of the domus of the triclinium, in the exact state in which the current remains of Lésera are found, with texts in Braille. Through the Lésera file we find a 4k video with subtitles in 3 languages, the virtual construction of the domus, digital preservation with Creative Commons licences for researchers of today and the future, as well as a repository with all the publications on the Roman city. All this material helps us to heal part of the wound of what history destroyed and now virtual reality gives us back.

Technologies not only preserve and globalise archaeological treasures such as Lésera, they go beyond that, they awaken the desire, in those who do not know the enclave, to want to experience in situ the sensations of those Roman ancestors, a curiosity that feeds sustainable cultural tourism towards an area haunted by depopulation. In the meantime, the inhabitants of Forcall have thrown themselves into the promotion of their archaeological site by holding the "Feria Ibero Romana de Lésera" (Ibero-Roman Fair of Lésera). The event, which includes guided tours, exhibitions of finds, conferences and debates on the transcendence of the Roman Empire in our times, has helped to reinforce the identity of the town, together with the publication of a story for children entitled "El meravellós viatge de Libori".

A STORY THAT FASCINATES

You can't love what you don't know or defend what you don't love, and Lésera, buried in oblivion, is re-emerging with the help of technology to enter into our lives and to captivate future researchers and public managers with its history, so that they will invest resources in unearthing the mysteries that complete a puzzle, the property of which belongs to humanity. Technologies democratise and build direct bridges to knowledge and respect.

Much has changed since that shepherd boy naively searched for what he thought were buttons. Now, at least under European law, children no longer work and are guaranteed a school that provides them with opportunities, a school that speaks to them the simple, visual language of communication technologies, more comfortable paths to the democratisation of knowledge, paths that create an awareness of respect for a world that belongs to everyone and as such generates a feeling of respect for its preservation.

Video │- Ferran Arasa, PhD in History, researcher and professor of archaeology at the Faculty of Ancient History at the University of Valencia, introduces us to the history of Lésera, possibly the largest Roman city that existed in the province of Castellón.

The model has been designed by Dr. Jaume Gual Ortí Professor and researcher at the Department of Industrial Systems Engineering and Design, Universitat Jaume I (UJI).

3D tactile scale model of the domus with codes with access to audiovisual content and Braille reading and writing code.

By means of the enriched three-dimensional models we can visit the heritage assets through their most significant points, which provide us with textual information, images, documents, links, audio guides, etcetera.
All our models are prepared to be viewed with VR glasses, which provides the viewer with a three-dimensional and immersive experience. This platform, Sketchfab, also implements AR technology.

Do you dare to travel back in time?

Digital preservation of the project

This project is based on knowledge transfer, free science, democratisation and the promotion of culture and technology. Through the following DOI you can download the geomatics project under a Creative Commons CC-BY-NC 4.0 international licence.

Digital preservation could be seen as a statement of intent. Preserving and protecting this precious cultural legacy over time, making it available to today's and tomorrow's society.