Life and death of the Bronze Age

The visit to this site, whose access requires a short and beautiful climb up a path to the hill, will make us better understand its strategic location, placing us in the life of a small, well-preserved village, in which we can visit a number of spaces and contemplate the funerary mound, unique in the whole area for its construction.

After ascending the road that gives access to the top of the hill, the first thing that we find is a small village. The excavations have allowed us to know that the place was already inhabited 4000 years ago and has had several phases of occupation that ended in the middle of the 6th century BC.

The location of the village has a natural defense system because of the steepness of the land on which it sits. From this location, it is possible to accede visually to a wide strip of territory. Finally, its natural environment, scarcely 5 kilometers from the coast, and the strip of the coastal mountain range to which it belongs, suggests that they had resources enough for survival.

The site was occupied for the first time in the Bronze Age, only during a short period. Only some vestiges of constructions of this period have been excavated. This phase of occupation ended with the abandonment of the settlement, probably due to a fire.

In the late Bronze Age the place was again inhabited. This time the village was configured by building on terraces that took advantage of the irregularities of the terrain. Next to its buildings and in the less steep side was erected a defensive wall seated on the rock and constructed of great blocks of unpolished limestone locked in dry. From this stage have been recovered handmade ceramics, some medium-sized, and service vessels with incised or cord decorations. Together with the analysis of coal scrap, these findings have allowed a more accurate dating of this phase.

The last phase of occupation in the Iron Age configures the village with a clearer structure. We can detect three streets around which are distributed thirteen buildings of rectangular form grouped in four blocks. The construction technique is simple, with flat but unworked stone blocks and a characteristic yellow mortar. Larger stone blocks were used for the construction of hearths and ovens as well as for the construction of ceilings. Its inhabitants differentiated storage areas from housing areas. The village was defended by a wall and apparently by a tower. It is assumed that mining was one main activities of the village.

Concerning their way of life, we know about their agricultural and livestock activities and about the working tools manufacture. Ceramics of tableware and storage have also been found. These ceramics are mainly handmade but, in keeping with the times, there are relevant pieces made using a potter’s wheel, as well as Phoenician imported ceramics.

The site has also provided several iron and bronze objects from this period, as well as some small iron knives and various bronze ornaments.

Through these findings it can be deduced that the settlement had a relatively short period of operation, between 50 and 100 years, an aspect that is consistent with the observed construction and use characteristics. No structural remodeling that could be interpreted as space reorganization or repair by deterioration has been detected.

This last phase of occupation ended with the abandonment of the village due to a fire, as it happened in the late bronze period.

This funerary tomb was used to bury the inhabitants of Mortórum during the Bronze Age, ie throughout the second millennium BC.

Discovered in 2006, it is a large funerary structure, formed by a central space or sepulchral chamber, delimited by large slabs in vertical, and supported by a more or less quadrangular structure built with large blocks of stone.

Although the tomb had long been plundered, the excavations have enabled us to recover archaeological remains of 5 individuals, although they could be enough more.

The tomb of Mortórum is particularly interesting because it represents a type of burial typical of other peninsular areas of megalithic tradition. At that time in Castellón and its bordering area the individual burial was more customary, generally in small caves. We can also find burials under houses or in graves.

This would consist of a simple chamber burial that did not belong to any tomb complex and was probably be reused over time during the Bronze Age settlement. The tumulus is located about only 250 meters from the village, which is very rare. 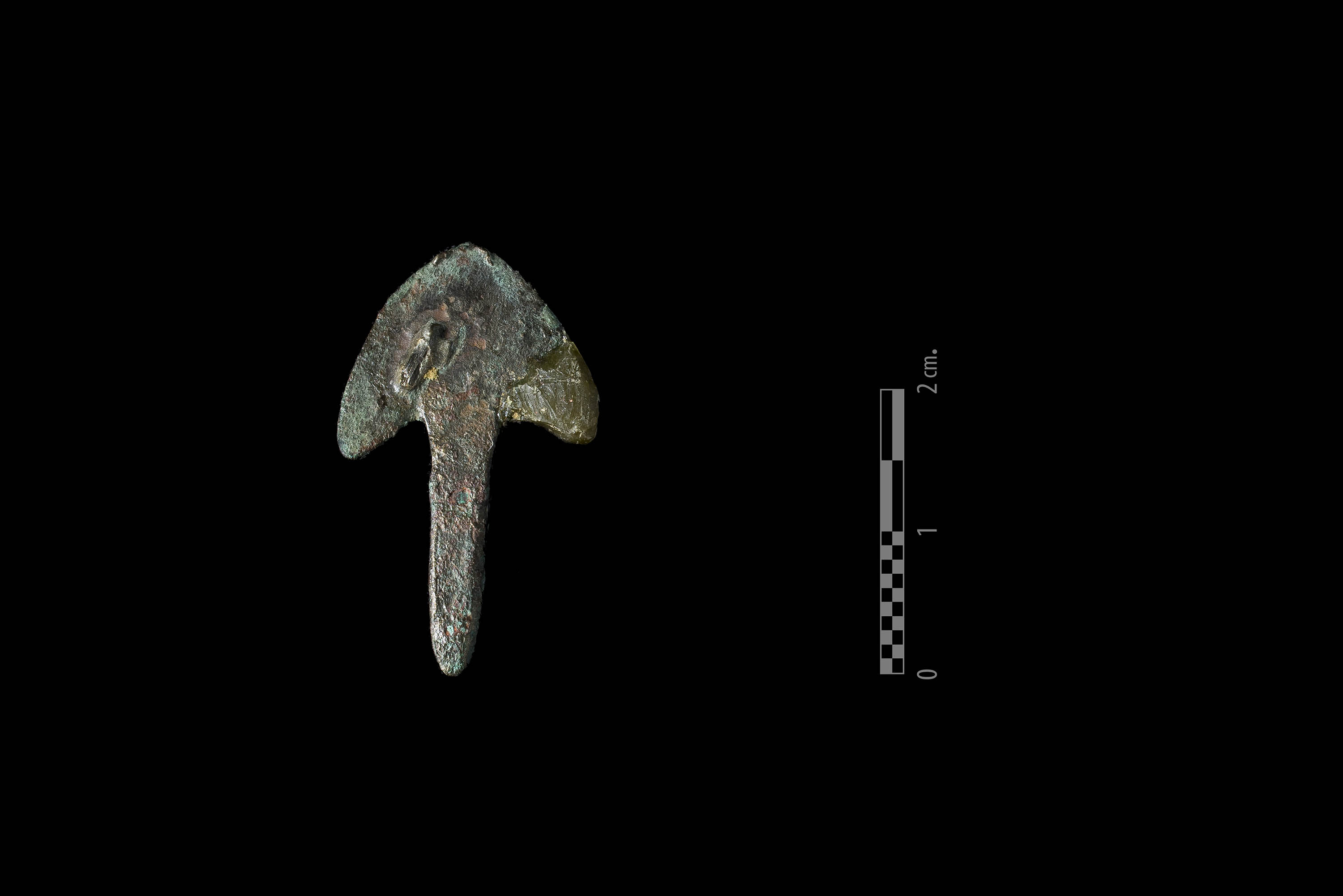 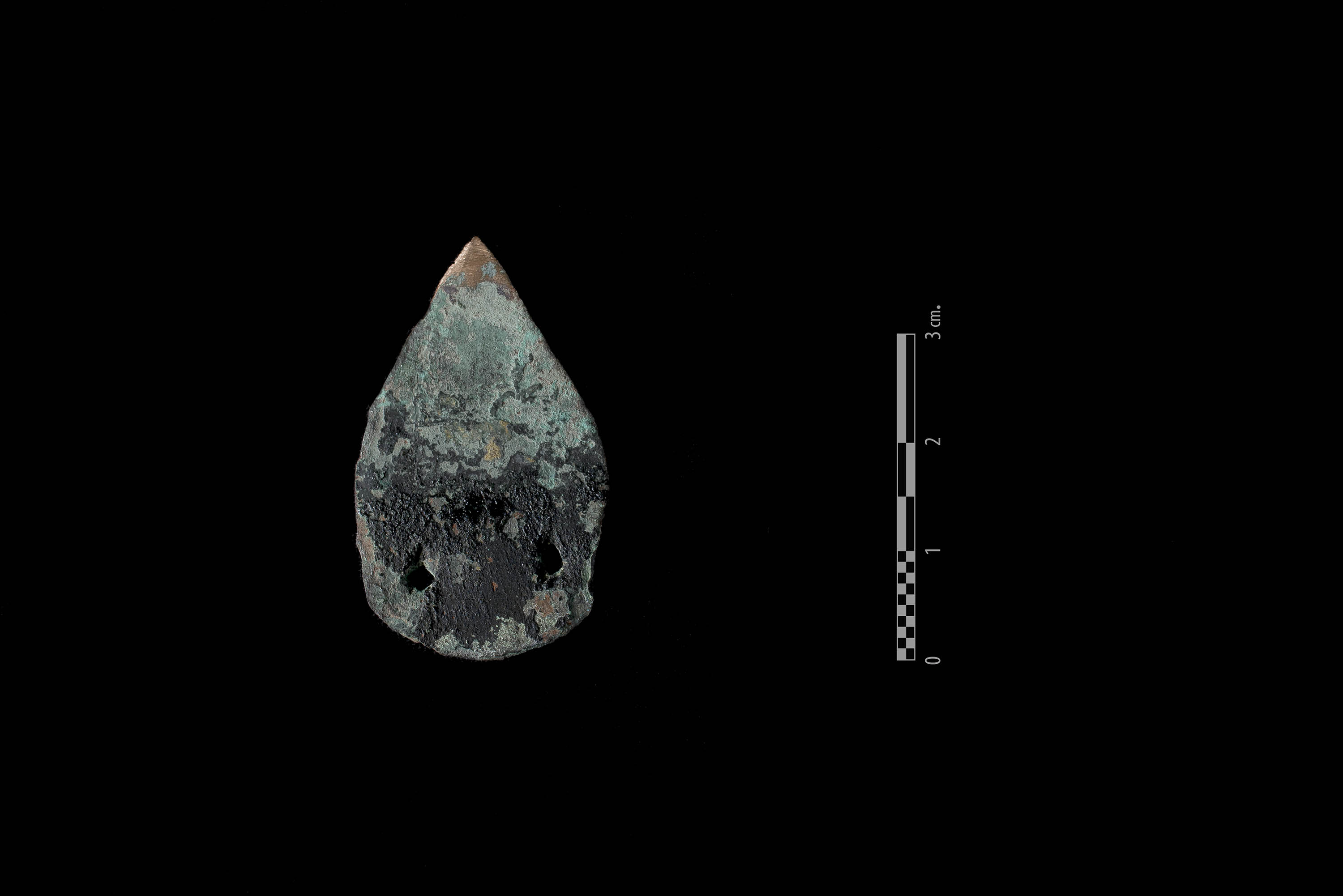 Copper arrowhead with fins and stem

Functionality: Object of personal use, oriented mainly to hunting and defense use.

Context:      Sector nº12, phase nº2, belonging to the Late Bronze period. It is a very altered sector, where only a garbage dump corresponding to the second millennium BC. village has been identified.

Small dagger with triangular rivets and rounded copper base

Description:    Small copper dagger with two rivets intended for the haft. It has a very short triangular blade and a rounded base.

Functionality: Object of personal use and considerable value, intended for cutting, drilling, etc.

Context:   Sector nº12, in the Ancient Iron Age center area, although it typologically corresponds to the Bronze Age. It was found out of its original context. 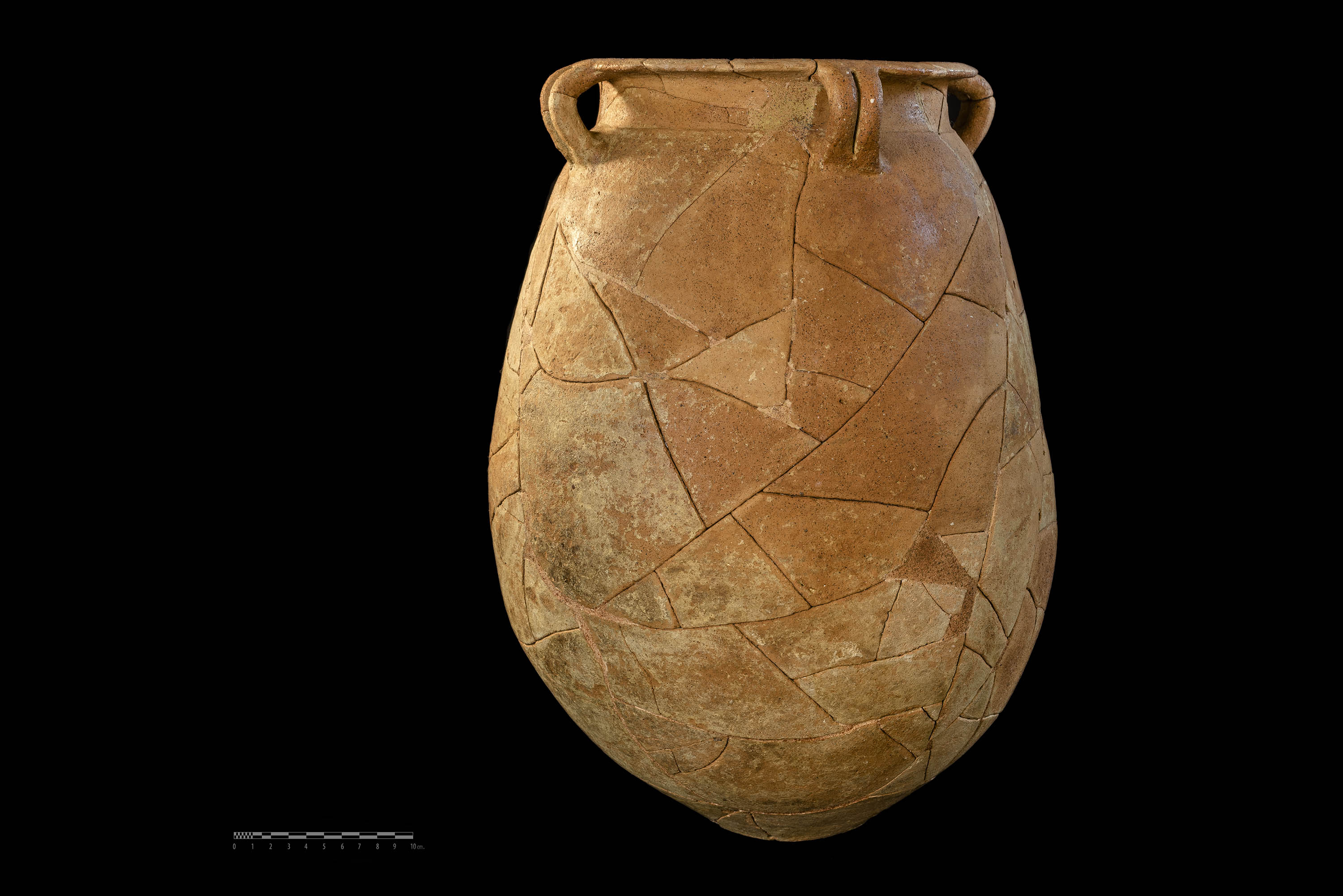 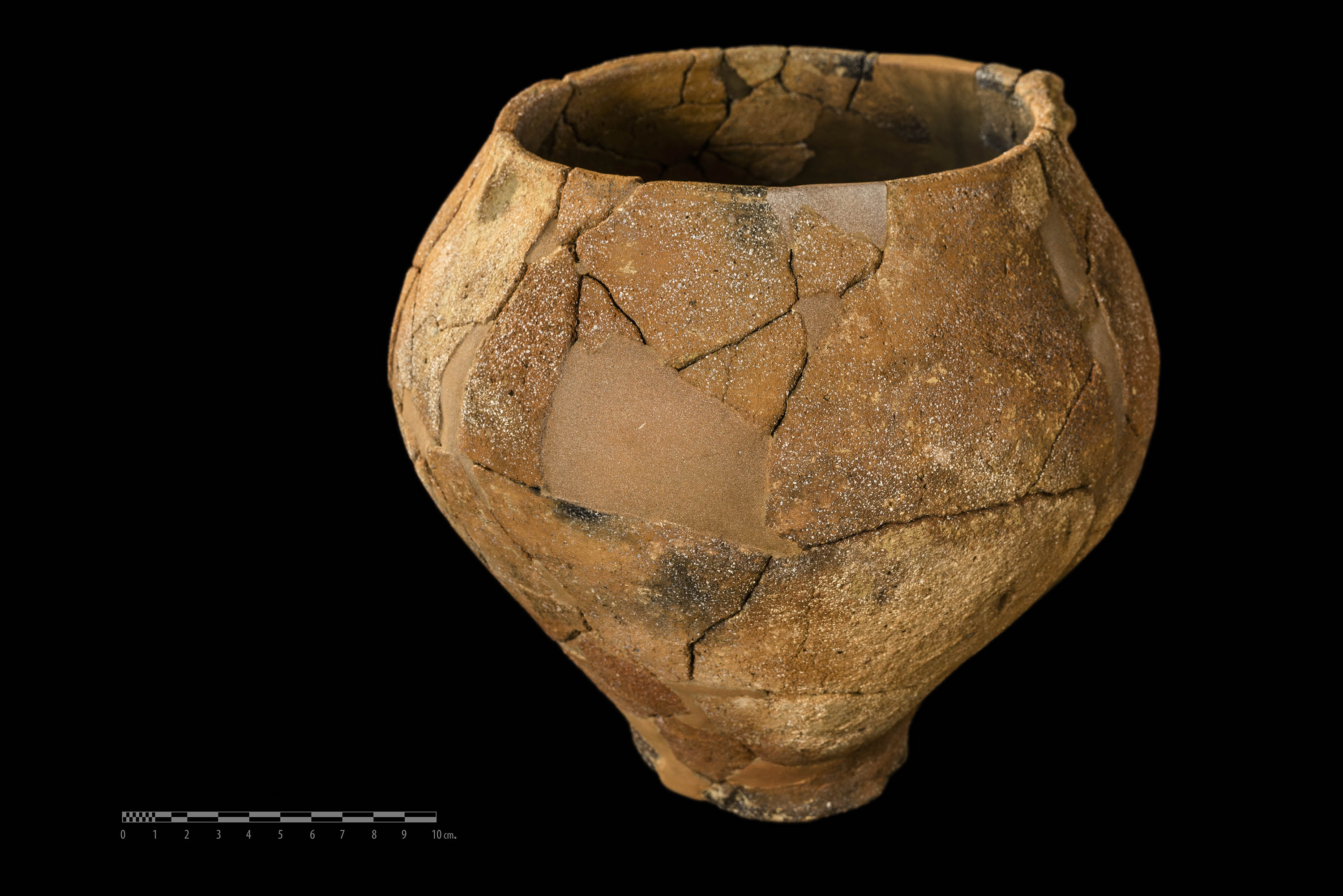 Description:    Large medium-sized jar, globular body, narrow flat base. It has four bifid handles arranged between the rim and the shoulder. Very altered surface, due to concretions. The painted decoration and the slip have been lost for the most part.

Functionality: Pithoi are medium or large size ceramic containers, intended to store food, liquids, or even to transport products. In general, they are imported pieces from the Phoenician colonies located in the coastal zone of the south and southeast peninsula. It is one of the main indicators of this commerce.

These types of pieces had to be highly appreciated among the indigenous communities, since they represented a clear technological advance with respect to the handmade local ceramic containers. The potter’s wheel allowed for greater strength, lower weight, smoother surfaces and greater waterproofing, which apart from producing aesthetically attractive objects, allowed a longer life and surely more handy objects.

Context:  Found in sector nº11, phase nº11, from the Ancient Iron Age. It is a structure located to the north of the 12th street. Inside there was no indication of domestic activity, but there were up to four complete vessels, including this Pithoi and three others made by hand. The vessel size suggests an intermediate warehouse, perhaps destined to store small quantities of products, or not very abundant products for their immediate consumption.

Chronology: Between the 7th and the middle of the VIth century BC:

Functionality: Medium-sized ceramic vessel. Due to its closed nature, it is more likely to be used as a liquid container, perhaps as an intermediate vessel between storage and consumption. On the other hand, close to this vessel was recovered a stone cap made from a flat slab cut that could correspond with this vessel by diameter.

The form is an ancestor of what later will be the urns of the Iberian period, already made using a potter’s wheel, very frequently used in necropolis to keep the cremated remains

Context:     Found in sector nº11, phase nº1, from the Ancient Iron Age. Sector nº11 is a structure located to the north of the 12th street. Inside there was no indication of domestic activity, but there were up to four complete vessels, including this jar and a Phoenician vessel. The vessel size suggests an intermediate warehouse, perhaps destined to store small quantities of products, or not very abundant products for their immediate consumption.

Chronology: Between the 7th and the middle of the VIth century BC: 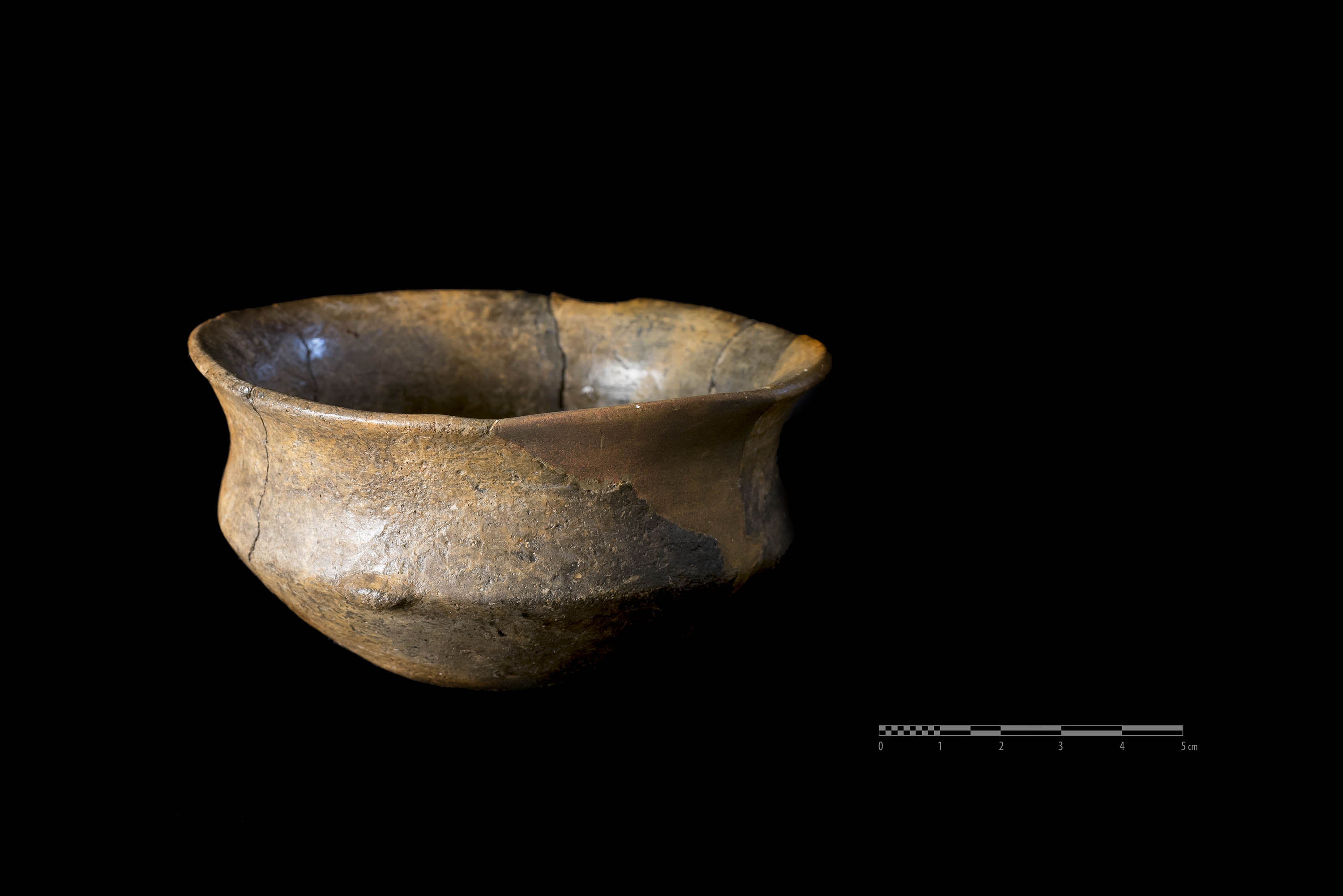 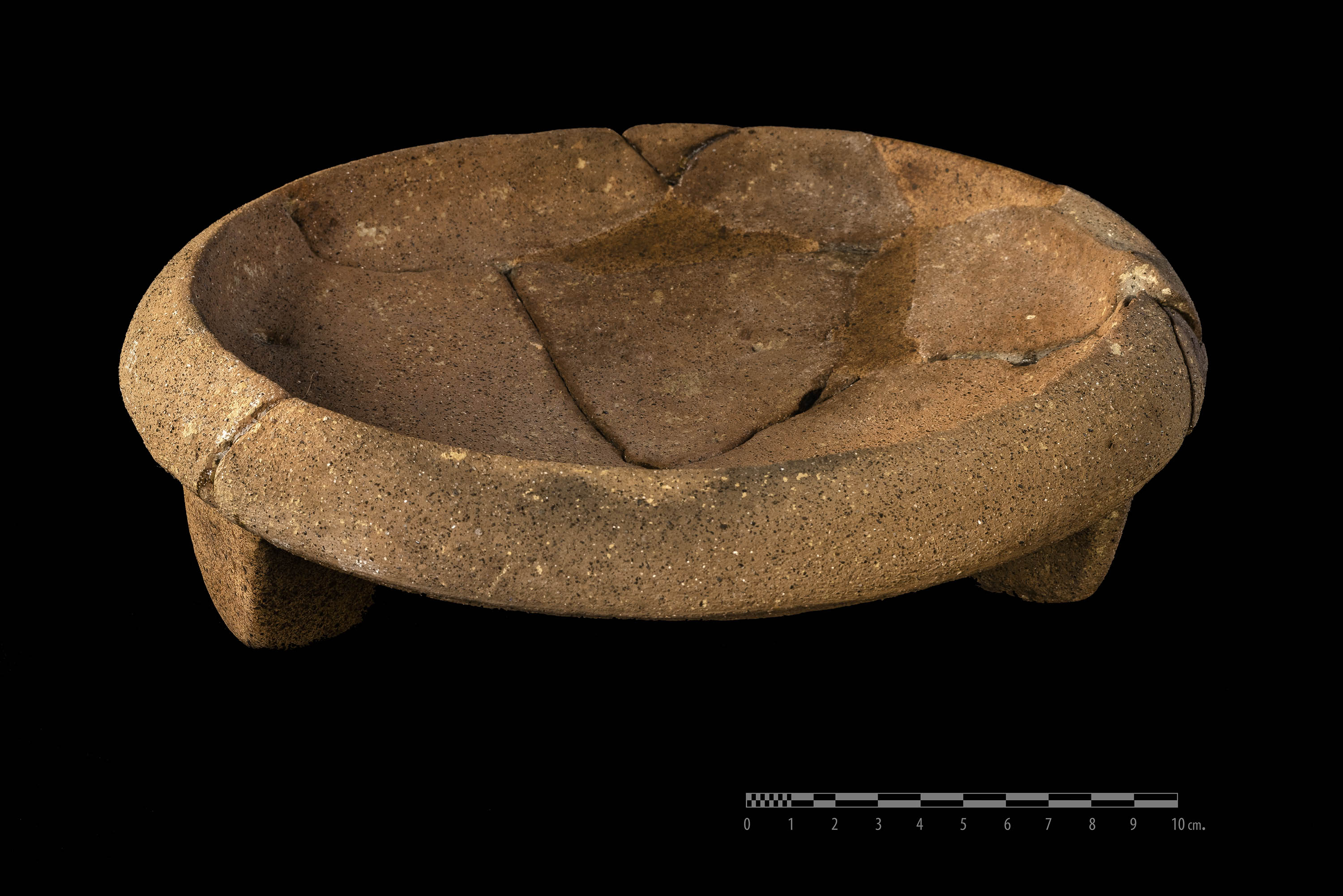 Description: Open carinated bowl with everted rim and pointed lip. Carina in medium position with elongated horizontal tongue. The diameter of the carina is slightly lower than the edge. Concave base.

Functionality: This kind of container is generally intended for processing and serving food.

Context:    Sector nº1, phase nº3/5 belonging to the first half of the second millennium BC. It contains the remains of a very poorly preserved structure, with remains of a stucco floor, attached to a powerful wall, type defensive wall.

Description:     Open flat container with vertical edges and three feet of rectangular section, made from ceramic using a potter’s wheel. Probably in its origin it had a yellow slip, currently lost.

Functionality: Tripod plates are another element imported from the Phoenician trade, which in addition to their functionality are of greater importance. It seems that they were used in ritual consumption with wine and food. These ceremonies were of great importance among the communities of the Ancient Iron Age. They were used to mix wine with various herbs before being consumed.

Context:    The dish was found fragmented in different sectors. According to the findings, this was the central area of greater activity and importance of the settlement known hitherto.

Chronology:    Between the 7th and the middle of the VIth century BC: 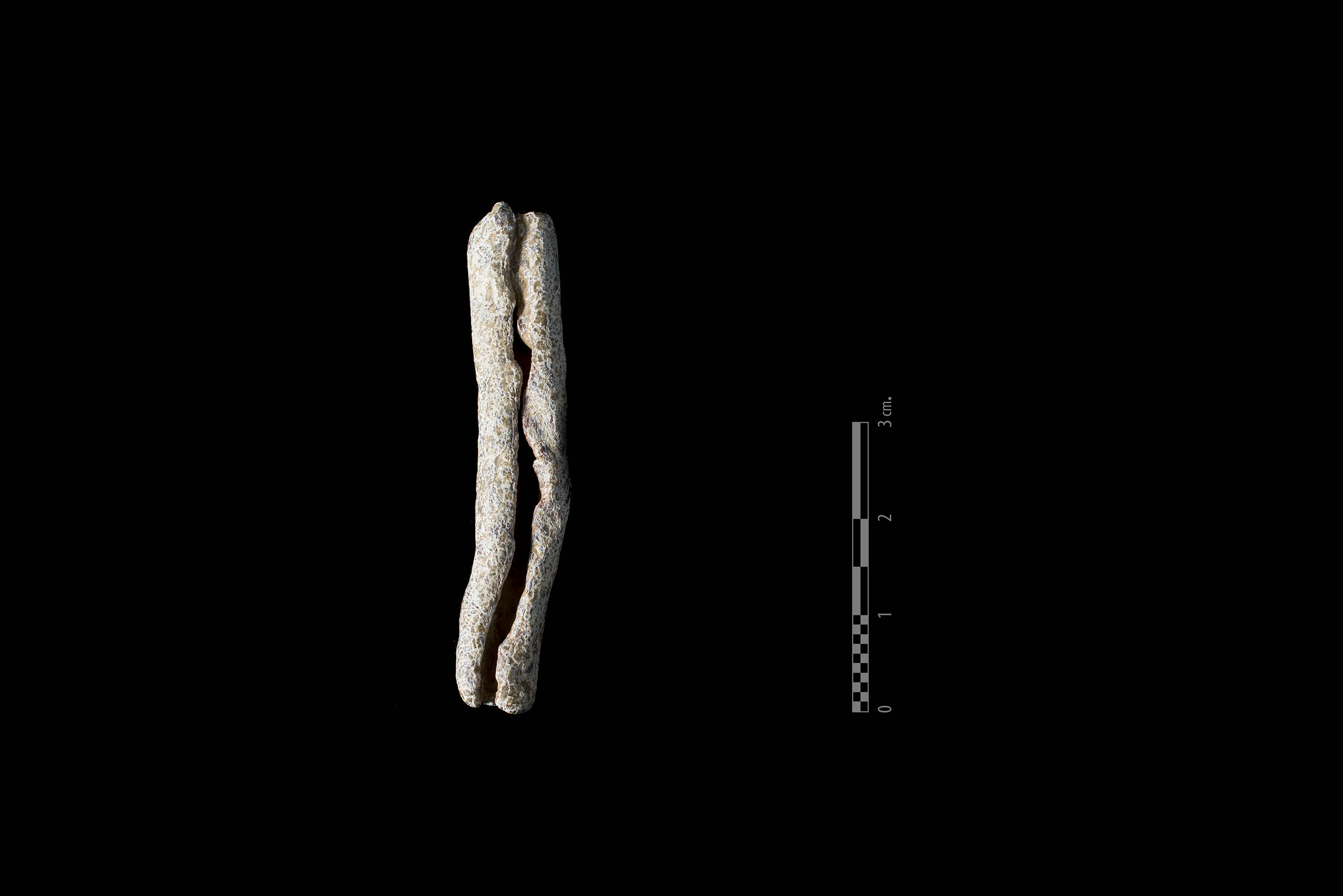 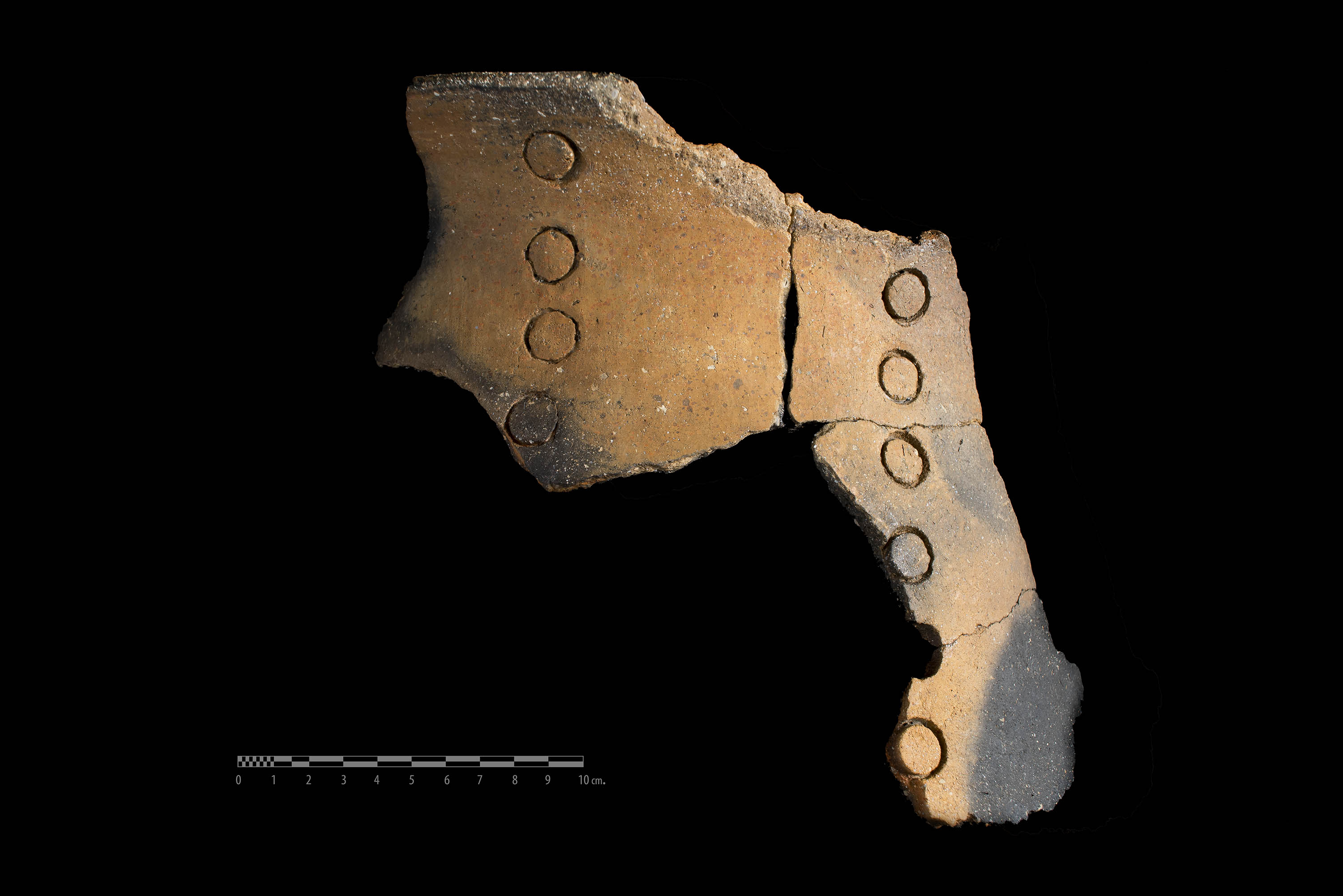 Functionality: Undetermined. According to the conventional typology it would be a net weight, destined therefore to fishing activities, although it could also be an object of exchange and transport of the elaborated lead, and raw material for the elaboration of other objects. In the Mortórum recovered several objects equal to this one.

Chronology:   Between the 7th and the middle of the VIth century BC:

Fragments of a ceramic container with printed decoration based on circles

Description: Top of a ceramic container of S profile with everted rim with series of circles printed in parallel vertical lines decorating the neck. Burnished surface.

Context:   Sector nº5, phase nº4 belonging to the first half of the second millennium BC. It contains the remains of a very poorly preserved structure, with remains of a stucco floor, attached to a powerful wall, type defensive wall. 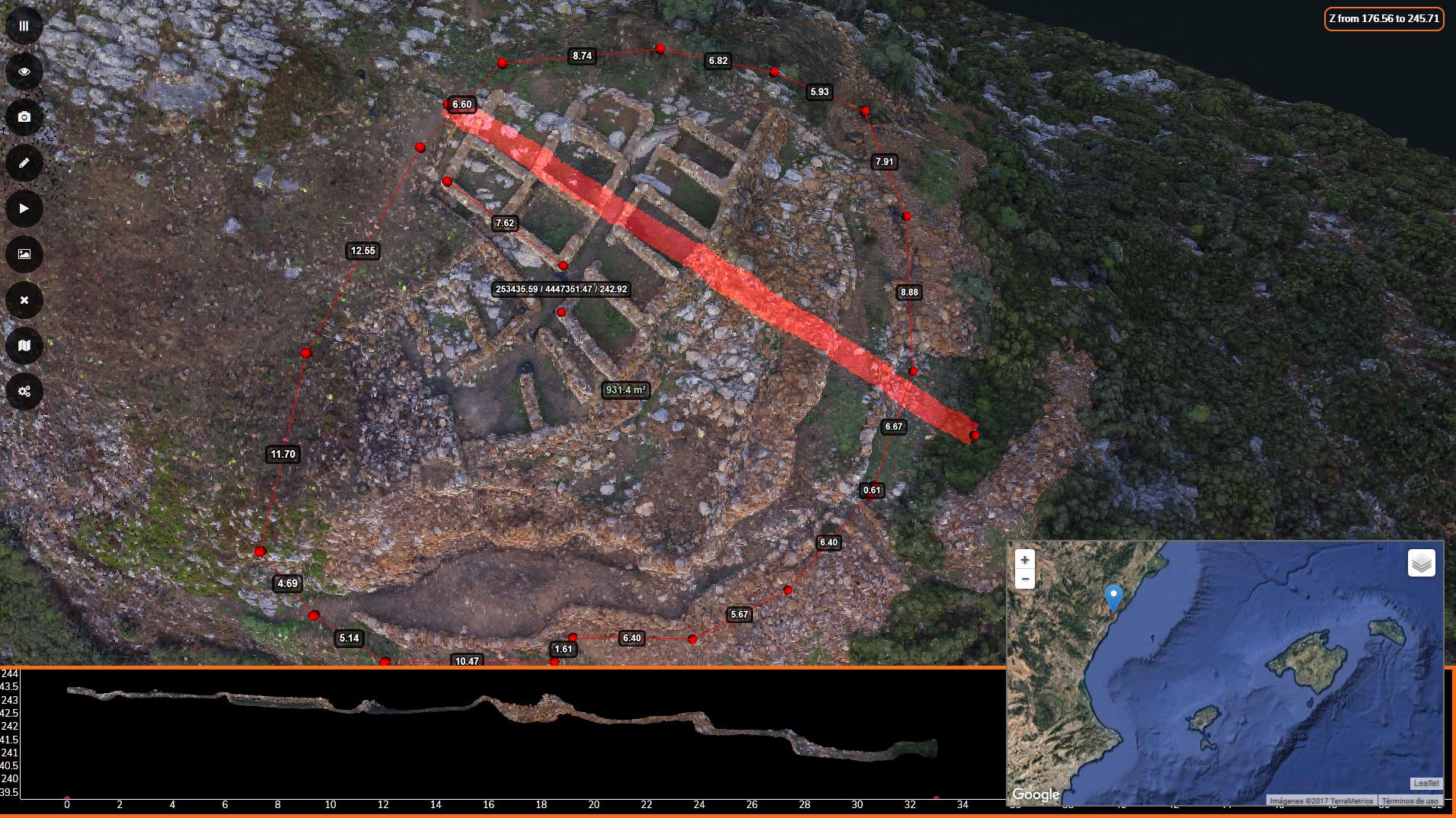 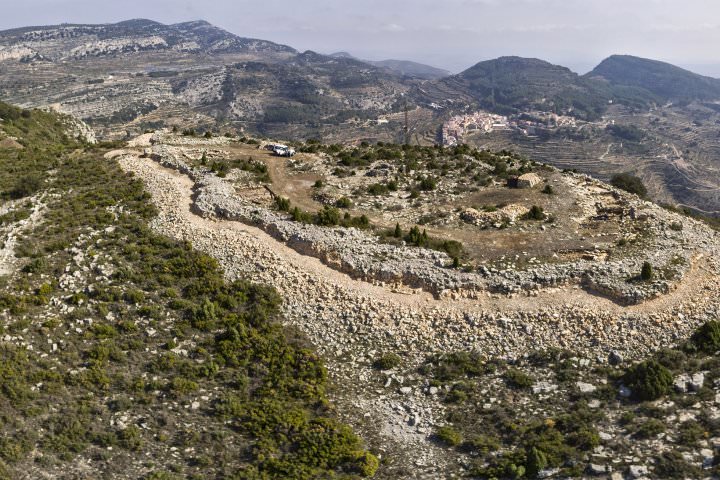 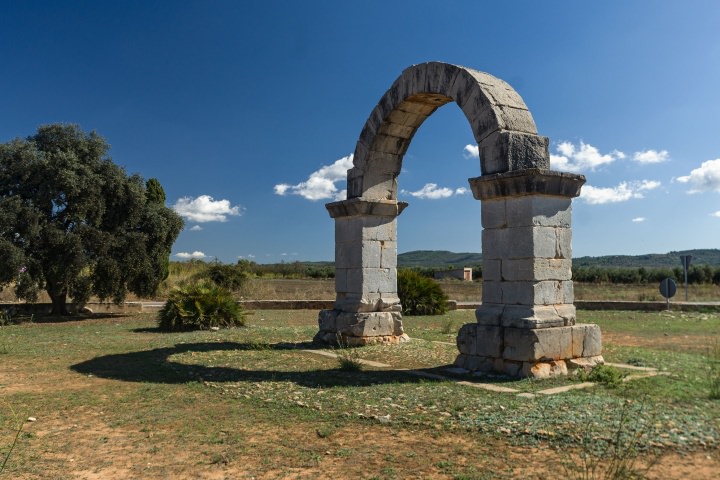 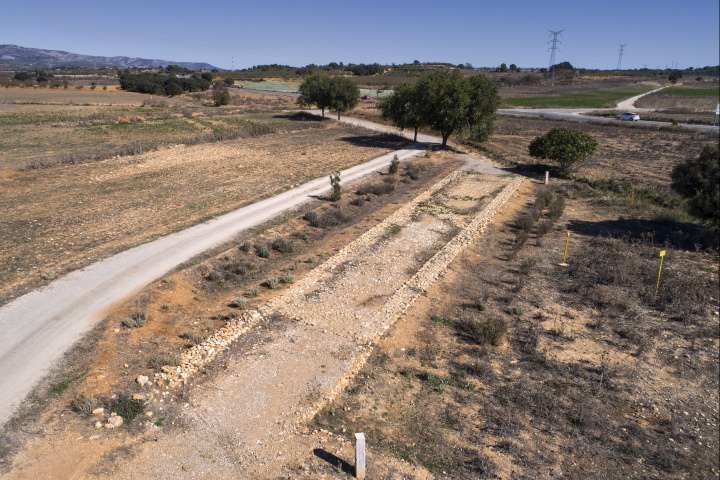 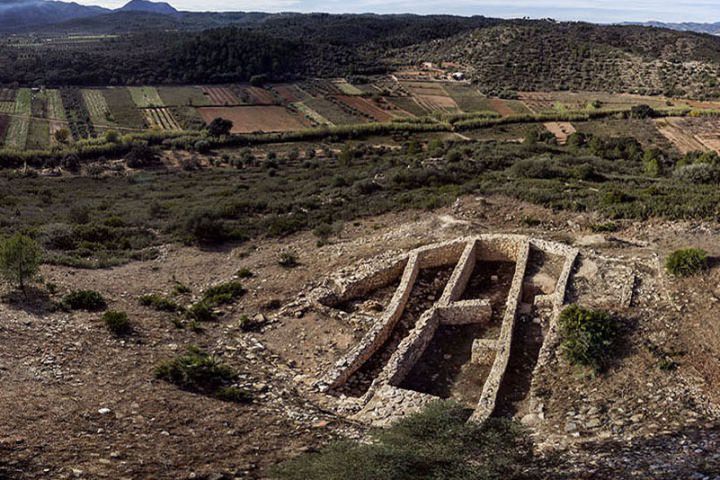